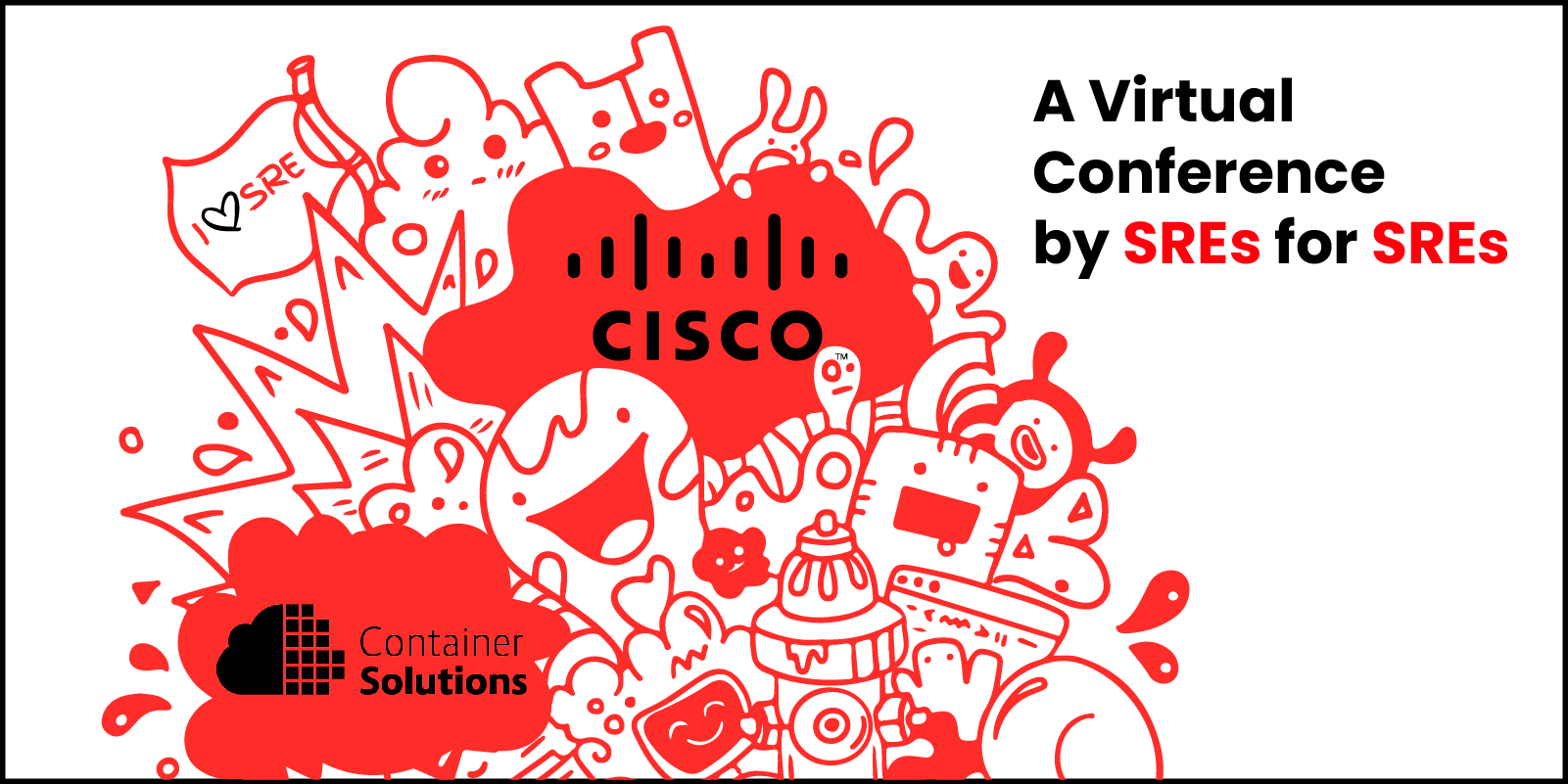 Around 2014 we were exploring Mesos and developing a framework for Elasticsearch. D2iQ (then called Mesosphere) got in touch, and asked if we could help out Cisco. We ended up working on Mantl, an early Cisco Cloud Native product that has since been discontinued.

“We were basically helping to productise it at that point, developing all the visuals and so on,“ Pini Reznik, co-founder and chief revenue officer at Container Solutions, told me. “And beyond that we were also working with Cisco’s former Intercloud Services CTO Ken Owens on future strategy - something called application intent which was very philosophical, futuristic work.”

Cisco was also one of the founding members of CNCF. “Ken was one of the people who defined Cloud Native,” Reznik said.

Since then Cisco has continued to build out its software portfolio, developing products and purchasing smaller vendors - giving it a comprehensive suite of solutions that cover platforms, observability and security, and that fit very naturally in a Cloud Native world. On the security side, for example, the firm bought one of the very first IP firewalls to market, Pix, conceived in 1994. More recently the firm has launched a Cloud Native firewall. “…we poured our security experience into a container to bring security functionality to that container world,” Jan Heijdra, security technology evangelist at Cisco told me.

You can see a similar pattern on the observability side with the investments made to acquire firms such as ThousandEyes and AppDynamics. “These are platforms that help us in getting data to create a full stack observability solution. And that is where you also see that Cisco is moving from being a traditional hardware player to a full blown software organisation,” Heijdra said.

The use of a cloud-neutral vendor like Cisco for observability and security tooling is one way to reduce lock-in to a single cloud provider, a concern recently raised by the Dutch counter-terrorism and cyber-security body.

“Cloud Native apps can run anywhere but when you start using monitoring/security solutions and policies from the same cloud vendor your operational model becomes fully intertwined with that single vendor, which makes it impossible to migrate towards a true multi-cloud environment,” Heijdra said.

The use of cloud-neutral tooling also gives Site Reliability Engineering (SRE) teams a more coherent view of what is happening across the different applications.

For anyone not familiar with SRE, the phrase is credited to Benjamin Treynor Sloss, vice president of engineering at Google. Sloss joined Google in 2003 and was tasked with building a team to help ensure the health of Google’s production systems at scale. According to Sloss SRE is: “what happens when you ask a software engineer to design an operations function.”

SRE is a cross-functional role, encompassing responsibilities traditionally siloed off to development, operations, security, and other IT groups. Cisco’s emphasis on security and observability makes their portfolio a particularly interesting proposition for SREs.

Heijdra again: “When observability and application security is done right, customers gain visibility into how applications relate to each other. It is critical to understand these application dependencies before developing a security policy based on the Zero Trust concept - ie, one in which you only allow what is necessary for the application to function with everything else blocked by default.”

Despite all this however, a challenge for Cisco is that their traditional technical contacts are generally sysadmins working with physical infrastructure, and aren’t necessarily thinking about Cloud Native solutions. And, perhaps strangely given their aforementioned deep roots in the Cloud Native movement, Cisco isn’t necessarily a name you immediately think of when considering the Cloud Native space. By working with Container Solutions, leveraging our reach as one of the thought leaders in the space, we are able to help them reach a new audience.

One recent example of this partnership was the launch of our first major SRE conference. As well as being our chief sponsor Cisco helped us define the vision, working closely with our head of events Carla Gaggini.

Opening with Liz Rice, open source officer at Isovalent’s, talk on “How eBPF is setting the world alight”, the conference attracted nearly 2,000 SREs, senior developers, IT managers, and team leads who came together to watch 21 talks on DevSecOps, Observability and Multicloud. Other highlights during the day included a panel discussion on “SRE, DevOps and Culture” with Hannah Foxwell, Apoorva Phadke, Pini Reznik, and Chris Urwin, plus Matt Stratton’s remarkable talk on “Releasing organisational trauma”. You can find all of the videos on our YouTube channel.

That event was so successful that we’re doing a follow-up webinar specifically aimed at managers. “What is SRE for Managers?” is co-hosted by Reinhardt Quelle, director of site reliability engineering in Cisco's Emerging Technology and Incubation (ET&I) group. This free event is on July 15th at 15:00 CEST.

Central to SRE is the idea of automating more of the reliability process to ease the workload on developers, making them happier and more productive. At Container Solutions we’ve long believed that Cloud Native is as much about culture as it is about containers.  Working with partners like Cisco we aim to ensure that this shift left in reliability forms part of a broader, more human-centric approach to software development. 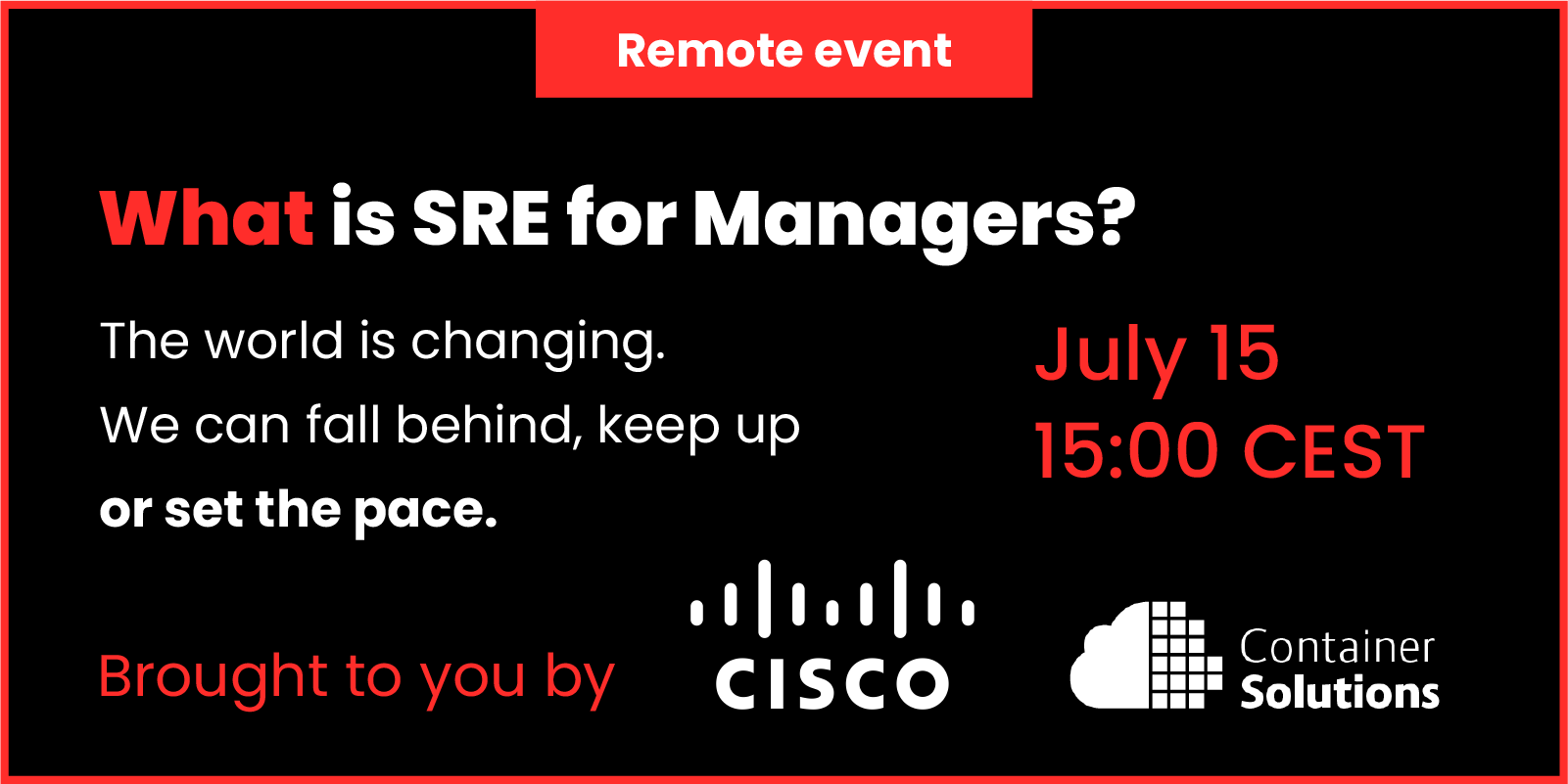 WTF is the Future of Cloud Native Software?

The Curse of Knowledge