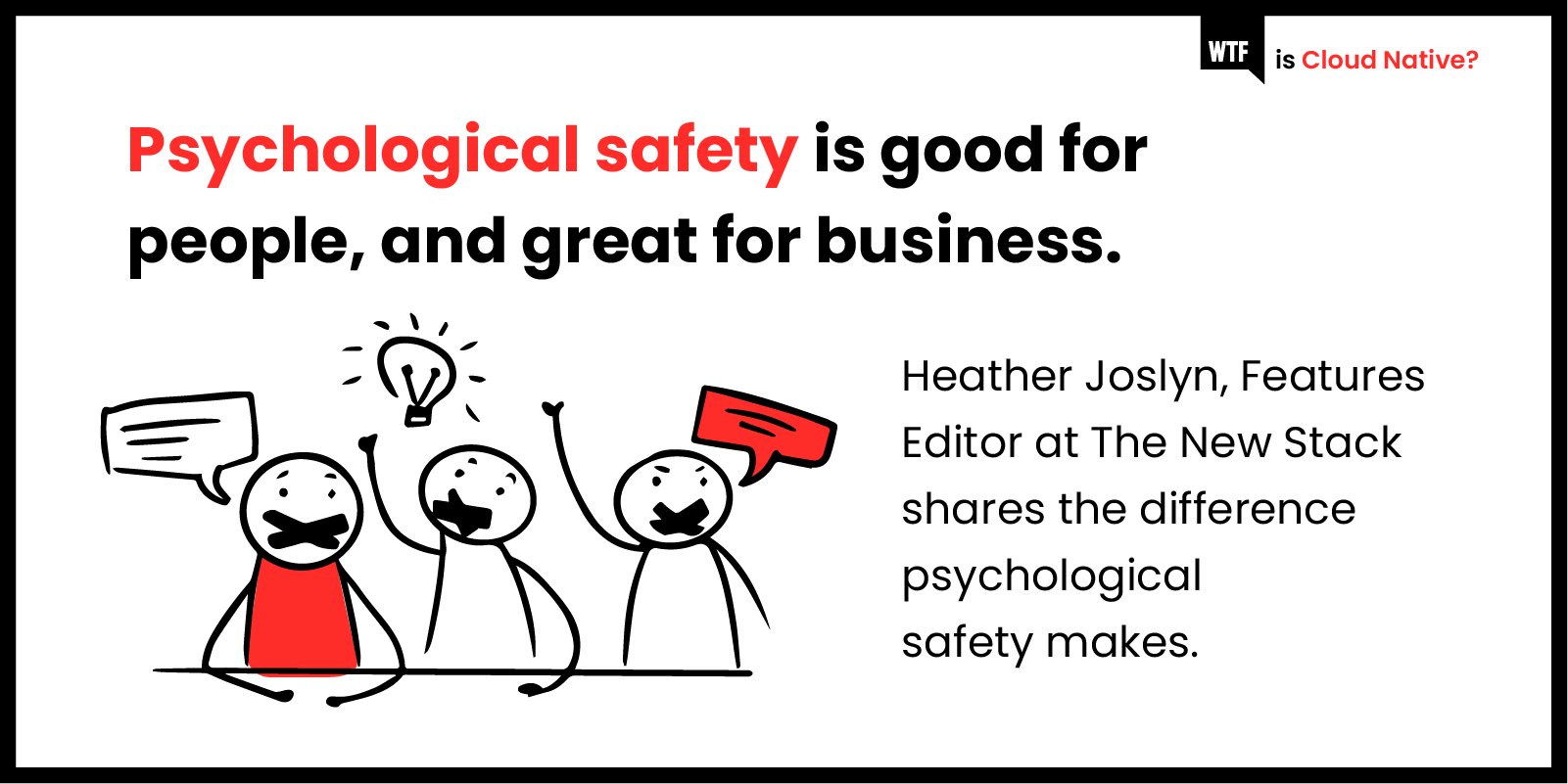 How I Learned to Stop Worrying and Love Psychological Safety

I’ve worked at Container Solutions for two years, but I don’t come from a tech background. I went to journalism school and spent many years in newsrooms.

It was a fun job, most of the time—you’re surrounded by bright, curious people, and you’re learning new things every day. And when the deadlines aren’t giving you panic attacks, they’re giving you endorphin rushes, and that’s always a good time.

The thing about journalism, however, is that it’s filled with journalists.

Don’t get me wrong. I love journalists, even if much of the public does not. Reporters and editors are interested in the world, and are usually good at explaining it. They are often hilarious, especially if your sense of humour runs dark. They will even buy a round of drinks—rarely, though some cases have been documented.

But journalists are not necessarily a tribe that embraces the concept of “psychological safety”. In fact, I had never heard of the term until I came to work for Container Solutions’s marketing team.

Newsrooms—the environment I spent my career in before Container Solutions—can be very creative places. But that’s not by design. News organisations are designed for competition and speed: being first in your market to publish a story, and being first in your newsroom to find that story and run with it.

Also, the flip side of some journalists’ intelligence is arrogance. It’s not pretty, but there it is.

This environment—in which people compete with the outside world and each other, and sometimes have too much confidence in their own smarts—is not one that reliably produces gentle folk who seek and value everyone’s input.

I’ve been part of some great, generous, productive brainstorming sessions in newsrooms, when everyone emerges buzzing with excitement, eager to start work on a new project. But I have also experienced some meetings that were minefields of humiliation: colleagues who would snort derisively when hearing an idea they didn’t like—or roll their eyes, or check their phones, or sigh impatiently. It’s not a recipe for free-flowing discussion.

There was no guiding principle in those organisations that valued psychological safety—the notion that no one would be punished or marginalised for speaking up, or even for failing, as long as lessons were drawn from the experience and there was no ill intent.

A touch of humility

When I began work at Container Solutions as editor-in-chief, I started hearing about “psychological safety,” and did some of my own eye-rolling. It seemed like a well-intentioned but naive idea. This idea would never last in the environments I had worked in.

But I learned more about the concept, from blogs written by Andrea Dobson-Kock, a psychologist who heads our People Team, and Helen Bartimote, our principal psychologist.  It’s an idea that’s been around for a while but it has gained traction in organisations, particularly within tech teams, in recent years. Google’s Aristotle Project found psychological safety to be the most important factor in high-performing teams, at least at Google. If people feel they can trust each other, the research indicates, they can bring all of their intelligence to bear on problem-solving. They can take risks.

I also learned a lot about the world of Cloud Native—and why a touch of humility is essential in understanding it.

Cloud Native technology is very, very new. It’s only been 10 years since microservices were named; only about half that time since Kubernetes was launched. Everyone in the field is learning, all the time. If you’re too arrogant, too dismissive of other people’s ideas, you’re going to miss something important. You’re going to fall behind. (Not to mention, you’ll simply piss people off and no one will want to work with you. The Cloud Native community is small, and a tad gossipy.)

Putting values to the test

So how does this all work? It’s not always easy to implement. Our team—which was largely assembled roughly a year and a half ago, just before the pandemic—struggled a bit at times with the concept. Not because we were dumping on each others’ ideas. Quite the contrary: we were being a bit too nice to each other, not offering the rigorous feedback we all needed to keep improving.

We had some intervention sessions with Andrea and Helen, and we quickly grew much more comfortable with each other, and with sharing ideas more freely. Our team reached the point where we can now offer frank feedback that’s respectful and constructive, but not so nicey-nice that we fail to point out when the tone of a message is off, or a design looks too busy, or some piece of work needs another iteration or two. We found a balance.

Psychological safety helped our whole company get through 2020, the year that Covid-19 took everyone’s carefully designed plans and shook them like an Etch-a-Sketch. Creativity exploded, as we worked to reinvent the organisation and rethink its services to meet the moment. As a result, this year is looking bright for Container Solutions.

I’ll be watching the company’s progress from afar: this spring, I am joining The New Stack as an editor. But I know that psychological safety is something I will take with me from the organisation I’m leaving. As far as I’m concerned, it’s an essential part of my toolkit from now on.

Why Every Tech Company Needs a Psychologist