Yesterday a Git user called David (dvonthenen) created a pull request that added external volumes to our ELK framework. This seems like an extremely valuable addition to our work. As David says in the pull request, upon failure, the system will ‘reattach the volumes and continue where it left off’.

On my bike into work I was thinking about the following: ideas having sex; knowledge is a strange type of property; and finally, I was thinking about how ideas move sidewards - I seem to recall this being described as the ‘adjacent possibility’, or something like that.

Matt Ridley, whose books I like, gives a great Ted talk where he shows a computer mouse and an axe.

Both objects are designed to fit the human hand. The handaxe, however, didn’t change for thousands of years. Yet the mouse has changed every year since its launch and is now more or less obsolete as trackpads and touch screens become the favoured way of interacting with a computer. 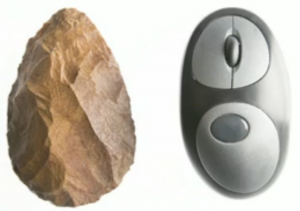 The shape of the objects are really where the similarities end. The mouse is a collection of many ideas: plastics, electronics, sensors and of course ergonomics - the one thing our caveman ancestors would have appreciated.

It is the way that ideas have sex that has led to the amazing acceleration of technologies that we’ve seen in the last 300 years. And because, like bacteria, ideas spread and grow, new products come out and are implemented at a breathtaking pace. When I was a teenager, cars had airbags, electric windows and ABS. Now they drive themselves. I am forty. Not four hundred.

There’s something else about ideas. I can teach both my kids everything I know. But I can’t give them both everything I own, they’d have to share it. In turn, they can teach their kids. As well as this, kids learn from their parents and their teachers, which gives knowledge a type of multiple inheritance, which is of course exactly what sex does. Unlike humans, however, where what we inherit is limited to two parents, ideas are the children of many, many, many parents.

This strange property is responsible for the way of work we see all around us. Up until recently, those who owned capital - machines, railroads, intellectual property - essentially owned the means of production. In our time of knowledge work, the means of production is in people’s heads. This is the one thing no capitalist can own. If this cannot be owned, then vast swaths of the means of production are now owned by individuals, which is why I think we see more freelancers and small businesses now than 20 years ago.

About ten years ago my shower was broken. The column which held the shower head had warped and was about a centimeter too short. My dad cut an old wine cork in two and inserted it into both ends, essentially making a short-term fix. This is one adjacent possibility for a cork. It is one use for which the cork was was not designed for but which was nevertheless very useful.

Now, back to the pull request from yesterday. Our ELK framework, which we build with Cisco Cloud, is itself made of two key technologies. The first is Apache Mesos and the second ElasticSearch. Both of these products are the children of multiple parent ideas. However, when they met each other, through our framework, they both started to leap to adjacent possibilities, some of which I am yet to fully understand. This is why the pull request was so interesting. We now have a situation where Elastic meets Mesos meets data volumes. What adjacent possibilities are we about to discover?

Finally, what is innovation? To me, at least from an economic perspective, innovation is about getting a larger amount of outputs for the same inputs. For example, a man in a factory might be able to contribute to building one car a day because he has a load of robots and computers to help him. 100 years ago we might have needed a hundred men to build a car in a day. Phil Winder, my colleague from Container Solutions, says this of the Elastic framework, it's a ‘major step forward towards the ultimate goal of performance optimisation, resiliency and scalability’. In otherwise, we are able to do much more with much less.

Therefore, David’s pull request was not ‘just a pull request’ but rather an invitation into a load of adjacent possibilities. How can that be anything other than exhilarating?

The advice for innovation is simple. You have to talk about your work. This is like chatting someone up. How can people like David find our work if we never speak about it? That been said, the internet and tools like Git are very good at helping ideas to find each other. Git in particular is useful for creating a 'shared memory' for projects.

It's also important to keep going. Breakthroughs tend to be like buses, you wait for one and then three come at once. If you believe what I wrote, that ideas have sex, then this is not surprising; it takes a fair amount of mixing and matching before ideas recombine and give birth. I say to my team all the time, just keep going, try not to worry. Innovation is of course the cost of serendipity, it's a cost worth bearing, which manifests in us keeping going.

Finally, innovation is radically inhibited by large organisations. It's better to have small teams working on mad ideas who every now and then meet each other. I am sure I once read about a nomadic people in Africa who would come to the same place every year to socialise. That's a good model for innovation. You have to get out there into the vast unknown, you have to plug away, and then every now and then you come back and mix up the idea DNA. Collaboration as it takes place nowadays, in open offices and on Slack, is vastly overrated. I believe this to be a sort of modern, collective neuroticism: people follow rules for innovation because they're scared of not looking innovative. I do my worst work in busy offices.

Innovation and the Fear of Loss