My Journey: Blazing a Trail 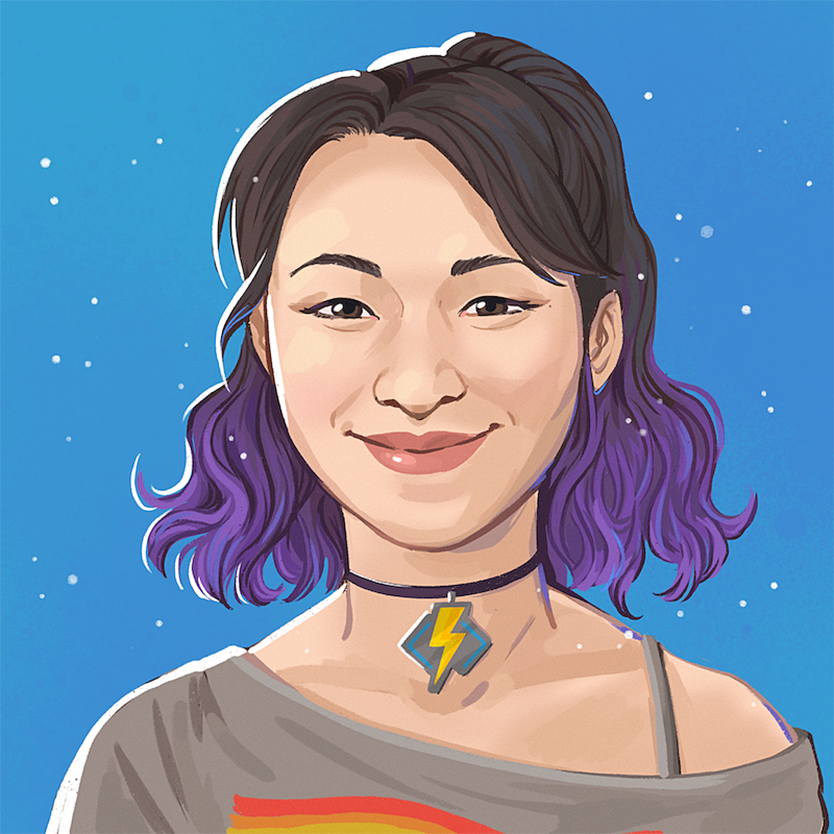 “Container Solutions is the greatest group of allies I’ve met so far. They’re not just interested in the label; they understand what diversity is really about.”

Alignment: Chaotic Good.
Captain Electric uses her telepathy for good by getting inside your head and sparking ideas. We’re glad she’s a superhero because if turned to the dark side, her powers could create the Condescending Gatekeeper of Doom and the Twittering Troll Mob!

I’ve been coding since I was eleven, but it took years to realize that the most important thing is that I like what I do and the people around me - and that I have the space to make mistakes I can grow from. I built my first website at twelve. Soon after, my friend and I had a company where we sold bits of code for websites, which we constructed from JavaScript snippets that we found on the internet. I wanted to change the world, though, so I went to university for law and got involved in politics. By the time I left university, I’d realized that what I didn’t like doing at school was what I would have to do every day as a lawyer. I also realized that to be active in politics the way I thought I wanted was to give up my private life. And I just couldn’t do that.

I remembered how I’d enjoyed coding, so I got an apprenticeship at a big gaming company. They didn’t seem to know what to do with me. They would find work for me to do, but it wasn’t anything that would teach me programming. Eventually, a junior developer took pity on me and spent an hour a day teaching me the patterns and what I needed to know to develop software. I was really lucky. He knew that if you’re just picking stuff from the internet and doing it the way you think it’s going to work, you’re not learning how to do it properly. Anyone can code stuff, it’s not hard, just very logical. To really learn how to think about software, though, you need to see how it’s done properly. That’s part of the reason why I mentor now, through Nodeschool and Railsgirls among others. I have a group of friends from JavaScript conferences where I speak about machine learning and we work together to coach other female speakers, especially newcomers.

I started on machine learning courses because the web world can kind of focus inwards and I wanted to see if I could bring other types of engineering into the bubble. What I love about machine learning - and introducing it to others - is that it’s so different from conventional coding. Conventional coding is oriented around finding a solution; machine learning is oriented around how to describe the problem. It takes a lot of data sets and forces the system to learn what it needs to do to change the value from one point to the other. It makes you think about the problem itself and how to describe it for the machine to understand.

Sometimes when I speak about machine learning at tech conferences, I literally see some men sit back with their arms crossed as if to say: “Go on. Impress me.” I noticed that as I was becoming more of a public figure, especially as I started using Twitter for talks, some people were offended that I had opinions. It gradually started to set in that being a woman is different. I had thought that what matters is what you do, but it really doesn’t. At one company, I was a team lead and made half the salary of a male colleague with a similar level of experience. When I started interviewing, I had a company ask me to come back with examples of my work. They canceled that appointment when they hired a male acquaintance who was at the same level as me, without asking to see his work. These experiences focused me on mentoring women and people who are underrepresented in the tech world.

Container Solutions is the greatest group of allies I’ve met so far. They’re not just interested in the label; they understand what diversity is really about. It’s not like collecting each type of Pokemon, it’s about having a diversity of experiences. I encountered Container Solutions (CS) because they volunteered their space for my friend’s “Stupid Hackathon”. I felt like this was a place with supportive people and without the kind of office politics that can ruin a job. I like that they say “we don’t hire skill, we hire potential” because technical skills can be learned; curiosity can’t.

I just moved to the Amsterdam HQ and I’m looking forward to developing my network here. I’ve already started coaching a couple of colleagues on their presentations. CS is already offering to help me set up a bootcamp or a hackathon for new developers. I’m finding more and more that if you’re looking for a place to grow, CS is the place.

“If you feel inspired by my journey with Container Solutions, and want to explore your own opportunities to join the team, check out our current job openings today! “

ITV - A Cloud Strategy With 50 Years of Legacy

Container Solutions Becomes a founding member of the Kuberne...