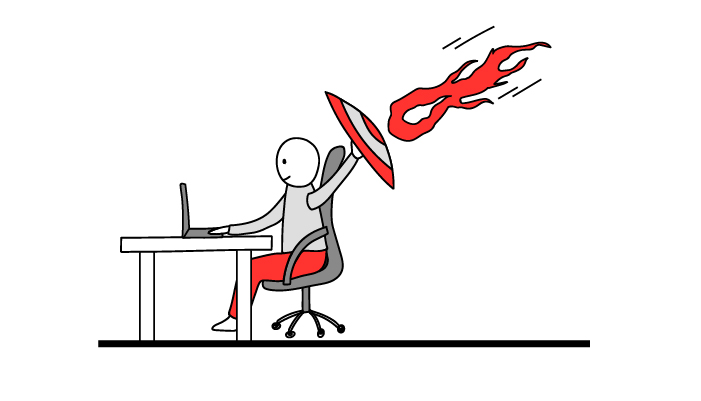 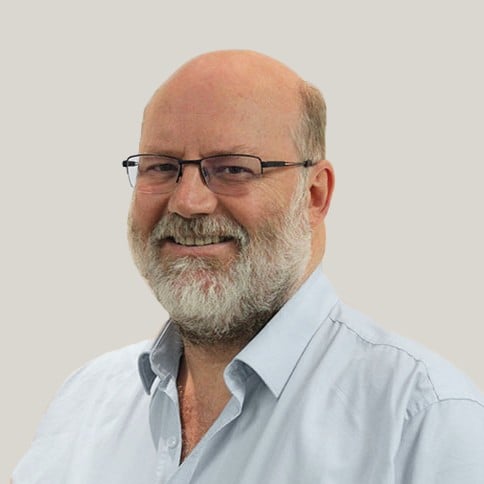 Perhaps unsurprisingly, the topic of resilience is something that’s been explored and discussed a lot lately. Early in the pandemic, Container Solutions’ co-founder Pini Reznik published a free eBook on the “The Resilient Company”, to help leaders survive and navigate the sudden crisis. The topic feels worth revisiting now, partly because the pandemic has taken longer and had more impact than, I suspect, most of us thought it would at the start, and partly because we’ve all learned a lot about personal and corporate resilience over the last two years.

Elsewhere in this WTF collection Sarah Wells describes her experience at the Financial Times, applying lessons from SRE to business continuity. In this piece, we want to consider how organisational culture provides the foundation on which resilience stands or falls. But first, we need to consider:

Culture is perhaps one of those things we recognise when we see it, but struggle to define clearly. However, to build a culture that supports and enables resilience we need to understand what it is, and we must design it deliberately.

Organisation Culture is described in many different ways:

Another way of describing culture is simply the way things get done around here. The largely unwritten set of things that get acknowledged, allowed, overlooked, accepted, rewarded and punished both overtly and covertly.

Culture emerges whenever people collect and collaborate and, because it is inherent in the interconnections between and around people in any group, is unavoidable in any organisation. In other words your organisation has a culture, but without careful and deliberate design that culture will truly be the lowest common denominator of the behaviours in the group.

There are many aspects and characteristics of organisational culture that have been identified through lots of different research studies over the years. In the Fundamentals of Leadership, the authors state that initial culture is established in the earliest days of an organisation’s formation and is a function of the founder’s values and principles along with industry demand. Together, these define the early values, goals, and assumptions that become “the way we do things”.

Once the initial culture is established, it is difficult to change. Many founders have made the mistake of not consciously and deliberately paying attention to establishing the culture they aspire to, leaving it to emerge without guidance. We see high-profile examples of that in organisations like Microsoft in the early years, Uber and others. Culture needs to be carefully nurtured and maintained from the beginning, or as the organisation grows it will likely rot and devolve.

As the organisation grows and evolves with new people coming into the mix and different pressures emerging and adapting, organisational culture changes through four mechanisms:

All of these factors result in a collective set of beliefs, values, attitudes, and behaviours that together become the culture of the organisation. Collectively these things can be made visible and measured, which makes it both possible and feasible to influence cultural change. 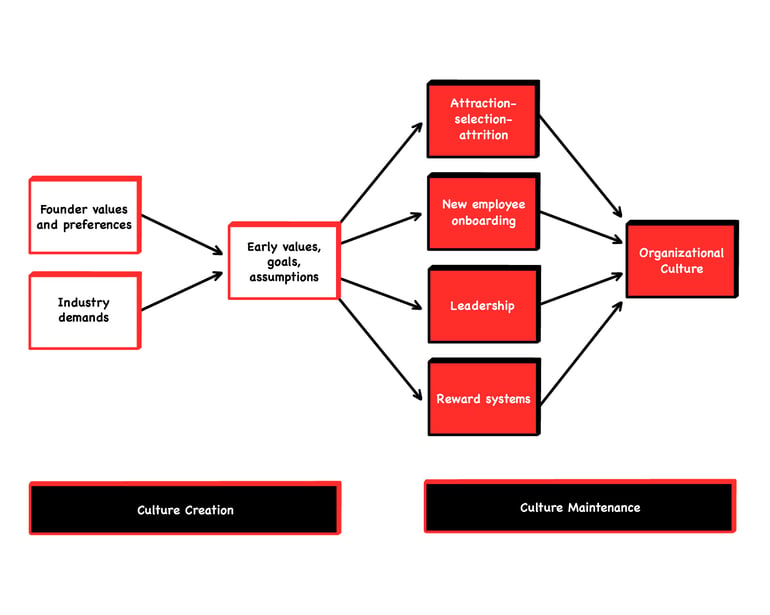 Whilst there are many measurement tools which can be applied to organisation culture, the instrument itself is not the important factor; the value is in both how the tool makes aspects of culture visible and how it allows conversations about what is there now and what different people in the organisation want to deliberately shift aspects of it towards or away from. Not everyone wants to become a Teal organisation tomorrow, but exposing the potential strengths and weaknesses inherent in the culture provides a basis for ongoing conversations and deliberate decisions about how and where it can and should evolve.

Understanding organisational culture, monitoring it, and actively working to maintain it are keys to long-term resiliency. Toxic cultures drive people away, and in this era of the “great resignation” culture is a competitive advantage and a key attractor to bring people into the organisation.

There are a large number of factors that can be included when looking to measure culture, but I recommend starting with these:

How does culture change?

Dr Ahmed Sidky provides a view of culture as being an elastic band that is defined by and holds together all aspects of the organisation—people, process,structure, strategy, and leadership. He makes the point that these elements have tight interdependence and the culture of the organisation is the visible manifestation of these interrelated aspects. This organisational ecosystem needs to be seen as a complex adaptive system, with each aspect a complex system of its own. 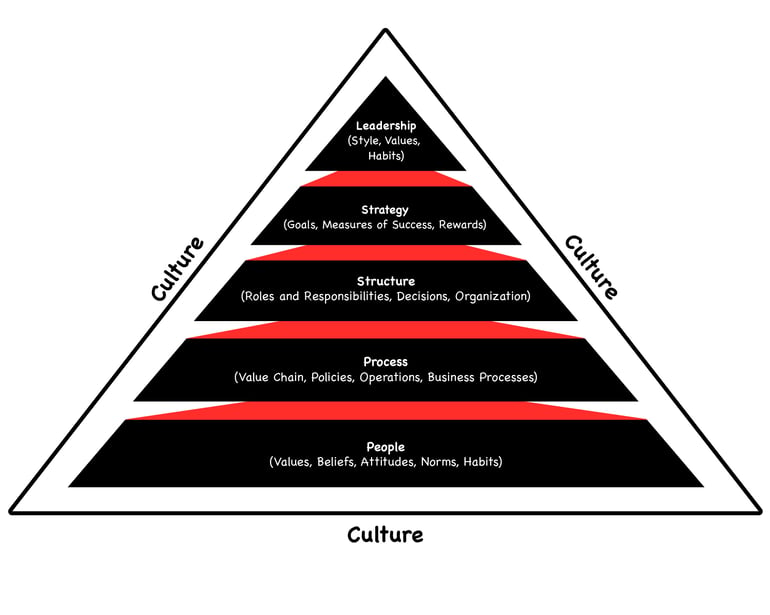 When looking to change the culture of an organisation, it is necessary to move all five of these elements in sync. Trying to enact change by just impacting one area results in a shift that is not sustainable.

Trying to enact change by adopting processes—perhaps adopting Agile development practices—results in a temporary shift, but without deliberately bringing change in the other four areas results in an imbalance as indicated in this diagram: 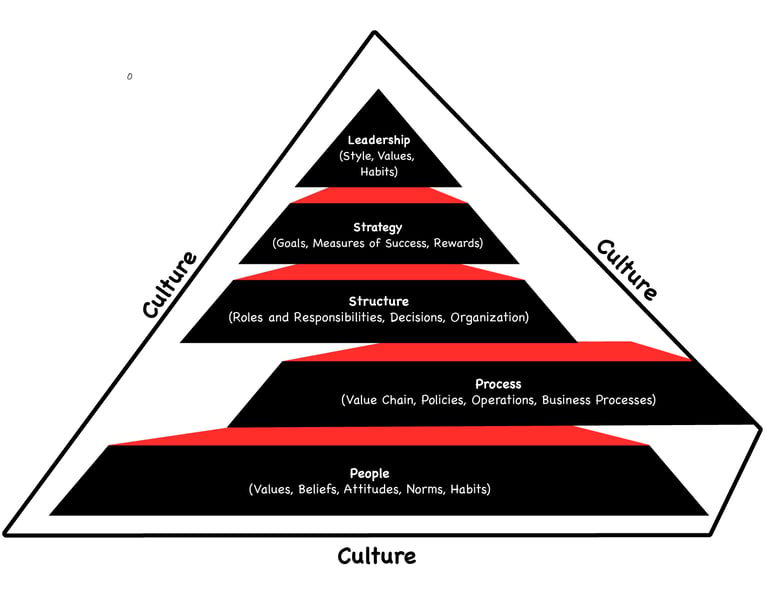 Pushing against the constraining band of culture will result in the change snapping back; new processes may be implemented but without the supporting changes in other areas the new processes will be subverted and bypassed, or consumed with the old way of working, and the organisation will not get the benefit expected from the change.

Sustainable culture change requires moving all five aspects together, in small steps with clear communication about the goal and recognition of the impact of change.

According to Bryan Walker and Sarah A. Soule, changing culture requires a “movement not a mandate”. Engage people at all levels of the organisation with a clear understanding of the outcomes and goals of the change and a path to get them there. Culture change is many people changing many small things in concert and moving towards the same goal.

To make this work you need a call to action that resonates with people and clearly identified shifts in all the pieces that interconnect, along with safety so employees can make mistakes and learn along the way (what we think of as a learning organisation at Container Solutions), and leaders at every level who influence and nudge people towards the desired outcomes.

Resilience in the face of constant disruption

In the volatile and complex world that organisations operate in today, building the muscles to continually adapt and evolve is a key to becoming a resilient organisation.

Resilience is not about resisting change and standing firm—it’s about bending and adapting to the realities, having people who can shift with the context of the moment, having structures which provide a framework that supports flexibility and innovation, and enabling leadership at every level in the organisation and empowering people to make decisions.

A resilient culture means enabling people to thrive and grow irrespective of the context they find themselves in. Leaders can encourage a resilient culture through deliberately engaging their people across multiple dimensions:

How to build a resilient culture

The recipe for resilience is straightforward, but far from simple. It requires supporting people in the organisation so they become resilient in themselves and are able collaboratively to cope with the constant buffeting in the crazy world we live in today.

There are some pointers, such as the 5 Starting points from Lumapps and research published by George S. Everly, Jr. in HBR:

Resilience is not a buzzword—it’s a competency that individuals, teams, and organisations need to be effective—perhaps even to survive—in the volatile world where we find ourselves now. The pace of change is increasing; the marketplaces we engage in are in flux; society is in turmoil.

To thrive in this crazy environment we need to build the muscles of resiliency based on treating each and every person in our organisation’s ecosystem with respect and dignity. Treat people well and they will reciprocate; empower your employees and they will do amazing things for your customers— from that profit and sustainability will follow.