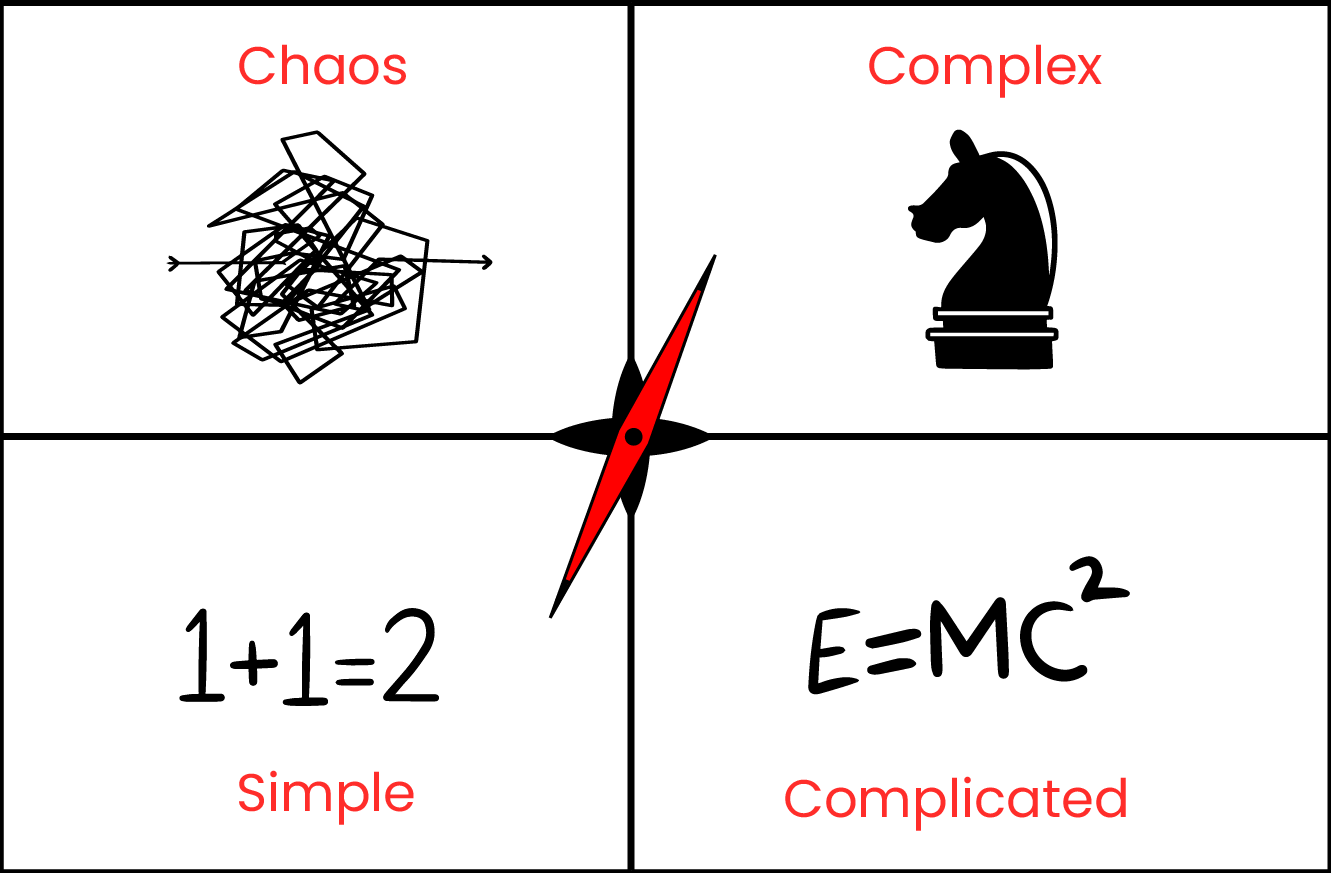 Why I Keep Coming Back to Cynefin

As I consult with clients to help change the way they work, I struggle to explain that their attack on problems may not be appropriate to the situation I was hired to help with. They might be a start-up that’s always taken an ad-hoc approach that is now struggling with scale up or maturity challenges, or a large corporation used to planning every detail upfront before acting. Now they find themselves having to experiment with new capabilities in fast-changing fields.

In these situations, Cynefin is a useful conceptual tool for bringing leaders to the point where they understand that they may need to change their usual approach for this new context.

Cynefin is a meta-framework designed to help managers identify how they perceive situations and make sense of their own and other people’s behaviour.

But first, here’s how it helped me understand where I’d been going wrong.

How Cynefin helped me

In a previous post, I wrote about creating runbooks and doing SRE in a real-world context. The post was well-received, and I figured I had this nailed. However, I learned something deeper about knowledge management and decision making with a client a couple of years after that when I failed to make the same techniques work in a different context.

The context of the original post was how a company with a 15-year-old software stack and prior examples of incidents and their histories of resolution were able to put them together in a more coherent and regularised form. Even though the situation was crying out for runbooks, no one had put them together. Getting to the point where they became part of the fabric of our work was still a long, costly and arduous one.

I found myself in a different situation sometime later. I was in a team that was trying to deliver a new software delivery platform against a dynamic technical background. While there, I tried to foster a culture of writing runbooks to cover situations we’d seen in development, but I completely failed to make it stick. The reasons for this failure were numerous, but probably the most significant was that while I’d learned my lessons in a stable, “best practice” context suitable for runbooks, the situation I was in was one of “emergent practice” where things were changing so fast that the documents were either out of date or redundant almost as soon as they were written.

While talking to a friend about this learning experience, they mentioned Cynefin (pronounced /kəˈnɛvɪn/, or kuh-NEV-in) as a framework for thinking about this kind of situation.

A great way to introduce Cynefin is to consider this often-mocked quote from Donald Rumsfeld:

I never really understood why it was mocked so much—it clearly states an important point about the nature of knowledge and ignorance in different contexts. The fact that it requires some concentration to follow should not have made it a cause of mockery. But hey.

Cynefin does something similar for business decision-making. It categorises the various types of context we might find ourselves in and helps us orient ourselves within them. This categorisation helps us to adapt our behaviour appropriately to the context.

What are these categorised contexts? There are five:

The fifth state (Disordered) just means we haven’t categorised the context yet.

Let’s take the two extremes first. The simple context might also be called the “known known”, or best practice context. It’s the context where any reasonable person can work out what to do if they know the domain. For example, if you’re an airline pilot and a light in your cabin flashes, there is a documented checklist to follow that describes what you need to do. If you’re a trained pilot, what to do is well-understood and consistently applicable. It’s a simple context.

By contrast, the chaotic context is one where no one knows what to do. In this situation, I like to think of improv comics. They are placed in situations where there is no right way forward; by design, they are thrown into an unfamiliar context where they are forced to be creative and experiment. If there were a best practice here, it just wouldn’t be funny. What is called for is “novel practice”—it’s vital to do something, see what happens and respond to what happens next.

Cynefin proposes that there are different patterns of decision-making in these different contexts. All of them end with “respond” (which seems to just mean take action) but are preceded by different approaches.

For simple, the steps are: sense, categorise, respond. In other words, figure out what the state is, which category of situation this is, and act accordingly.

For chaotic, the steps are: act, sense, respond. In other words, when you don’t know the right thing to do (or even where to start) just do something, and see what happens.

You can see how this maps to situations we’ve seen in different contexts. If you’re running an Accident and Emergency department, you seek to apply known best practices with every patient that comes in. So you sense (detect patient has come in), categorise (triage them), and respond (schedule them for appropriate and timely treatment). That’s a simple (though not easy) situation.

If you’re fleeing from persecution in a war-torn country, then it’s by no means clear what the right thing to do is. You don’t have time to sit and think, and you don’t have enough information to evaluate the best path. Even if you did have information, the situation is changing rapidly and in unpredictable ways. In such a situation, just picking something to do (eg run to the airport), and re-evaluating your situation at the next appropriate point is the best thing to do. So you act (do something), sense (re-evaluate the situation), and respond (decide what to do next).

The other two categories

Between the two extremes of simple and chaotic are two more states: complicated and complex.

The complicated situation is one where there is “good practice” (ie there is a good—but maybe not best—answer to the question posed by the situation), but it requires an expert to analyse the situation first. One might think of an architect called in to design a building. There are site- and client-specific things to consider in a broader context requiring expertise to know how to proceed in a good practice way.

In these complicated situations, you sense (gather relevant information), analyse (work out, using your expertise, what a good solution looks like), then respond (proceed with the build).

Complex sits between complicated and chaotic. It’s not complete chaos, as there is some prior knowledge or experience that can be brought to bear, but even knowing how to get to a good answer is unknown. In these situations, you need to figure out the best way by experimentation. As mentioned earlier, this is called emergent practice, and is appropriately handled by a probe, sense, and respond decision-making process.

Working in Cloud Native technology transformation, Container Solutions often consults with businesses used to working in complicated or simple areas. We find that our job involves helping them understand the inapplicability of one previously-working approach with their current one of emergent practice.

By contrast, when we work with those already operating in the complex space, we generally augment their teams with our technologists, who have more experience achieving good practice in Cloud Native. If the business is in a chaotic state, then we can use our experience to help them guide their decision making towards the complex or complicated space.

Why is Cynefin such a powerful consulting tool?

So far this all might sound quite trivial. It’s obvious to any reasonable person that your decision-making process needs to be different if you’re fleeing from a war zone than if you’re flying a plane.

What makes Cynefin such a powerful tool for business consulting is that it gives a framework to the common management problem: “What got your business here won’t get you there.” If you’ve read the book of the same title, you’ll know that its key message is that the more self-centred and driven approaches to success that worked for you when you were younger become less effective as you seek to lead others to collective success. You need to change your approach and your whole attitude towards work if you want to succeed in your new, more elevated context.

In an analogous way, the success your business had in its earlier states may be completely inappropriate in a new state.

Imagine a startup used to operating in a chaotic or complex context. They get used to “just doing it” and giving their staff freedom to solve problems in new and creative ways. This works for them really well as they grow fast, but after some years they find that their offerings to consumers have matured, and novel and creative solutions result more and more in waste, disruption (of the bad kind) and inefficiency.

What they need at this point might be staff who take a different approach more aligned to good or best practice. However, when people advocating such approaches arrive, challenging group dynamics can come into play. The tight monoculture that’s worked in the past becomes difficult to question, and those advocating a different style get alienated and leave, or just conform to the prevailing approach.

Similarly, a company used to using best practice to solve their challenges may be at a loss as to why their approach does not work. As a consultant, I’m often asked directly “what’s the right answer to this question?” to which the answer is all-too-often a disappointing “it depends”. What’s happened there is usually that they are seeking a best or good practice answer to a situation where an emergent or novel practice answer is called for.

Many of these patterns are documented here on our transformation patterns website, where we talk about:

It’s not just consulting or work that Cynefin can help with. It’s also worth considering whether you have a preference for a particular way of approaching problems, and whether this preference stops you from acting in an appropriate way.

My wife and I often clash over whether or not to make plans: she likes to plan holidays in advance, for example, and I find that process like pulling teeth, preferring to improvise. There are situations where planning is absolutely essential (got kids? you’d better plan activities!), and other more dynamic situations where time spent planning in detail is wasted as circumstances change (don’t book that restaurant weeks in advance, we may change our minds about where we’re going if the weather is bad).

Of course, in these situations, my approach is always best, and I don’t need any decision-making meta-framework to help me.

Tutorial: How to Set External-Secrets with GCP Secret Manage...