In the Part 1 I showed how to dockerize a node.js application on the development machine and later deploy Jenkins and Docker registry using Docker Compose and use them for continuous integration of the node.js app.
In Part 2 I continue the setup for Mesos and Marathon and complete the Continuous Delivery cycle.

If you have never heard about Mesos or Marathon, at this point it will be useful to read a bit about them: here, here or here.

Now, when we have functional development and continuous integration environments, we can start building the Mesos cluster.
Here is the full docker-compose.yml file that includes all parts of the system. In addition to previously configured Jenkins and Docker registry we have Mesos master, single Mesos slave, Mesosphere Marathon and Zookeeper for internal Mesos communication.

There is not much to explain in the docker-compose.yml. All of the environment parameters are taken from the usage instructions for the images on the Docker Hub.
The Mesos slave container also using the trick with the mounted socket, but nothing needs to be fixed here since slave is running the root user that has permissions to access the socket.
It is important to note that the Jenkins container now includes a link to Marathon. This is required to be able to post the requests from the Jenkins container to the Marathon container. We will see it in the next part about deployment.

Now we can restart the system and see it all up and running:

The containers will start very quickly (as they always do), but it will take about 30 seconds until all the services are online (on an Ubuntu VM running on MacBook Air).
Mesos will start on http://localhost:5050. You can also see one active slave in the following screenshot. The slave has no publicly exposed port in this setup. 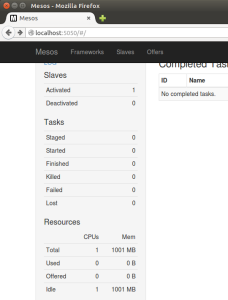 Marathon will be accessible at http://localhost:8080

The last part of the journey is to deploy our freshly built docker image on Mesos using Marathon. 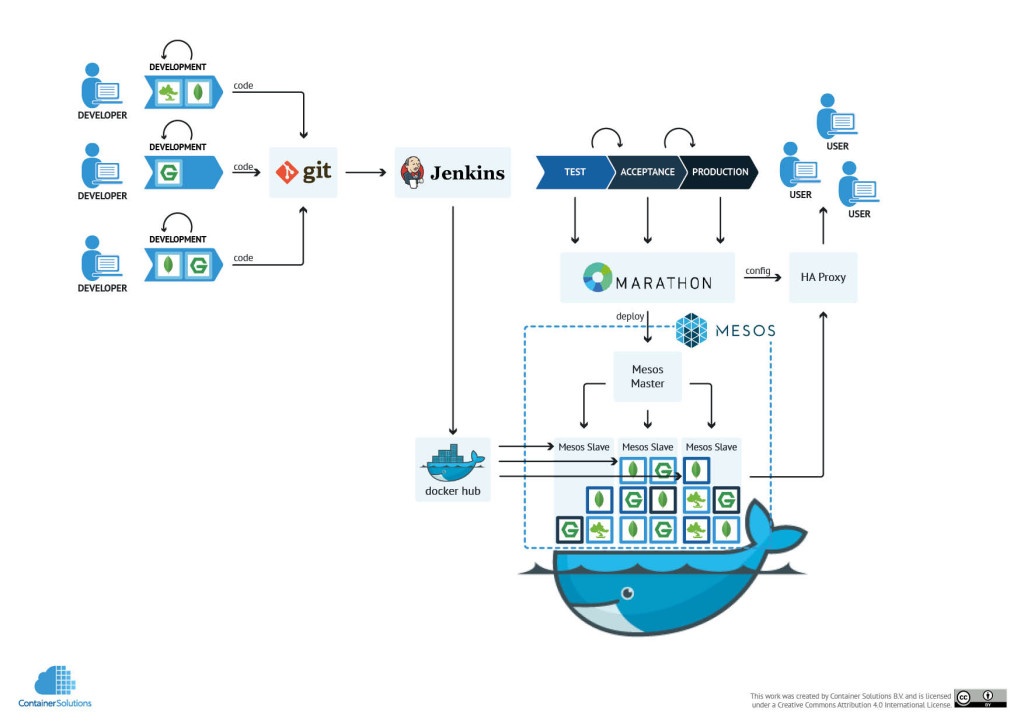 First we need to create the configuration file for scheduling an application on Marathon, let's call it app_marathon.json:

Here again there are some shortcuts. For example, an important missing piece is a health-check that should tell Marathon when the application is running and when it isn't.

Once we have the json file to publish we can add the last script deploy.sh that will remove the currently running application and redeploy it using the new image. There are better upgrade strategies but, again, I won't discuss them here.

The last step would be to add deploy.sh to Jenkins configuration and run the build. 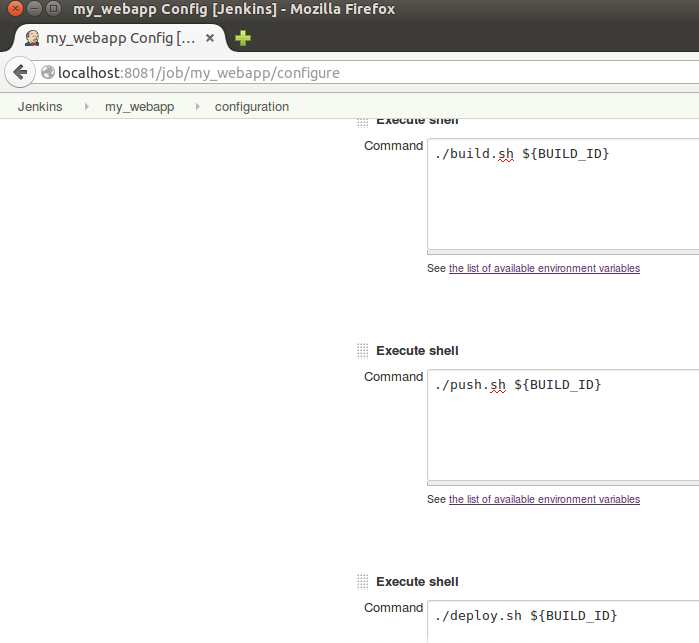 And after the build has successfully finished we can see the application running on Marathon:

Now you can try changing your application and triggering the build in Jenkins. In just few seconds it will find it's way through Jenkins, the Docker Hub and Marathon to Mesos!

Here is a short video showing the complete setup in action:

There are two main direction to improve this system - adding more functionality and deepening the quality of the setup.

The list of possible extensions is very long. Here are some examples:

My preferred next step would be to focus of the part of the system facing external users and add HAProxy and auto-scaling capabilities as demonstrated in the next diagram: 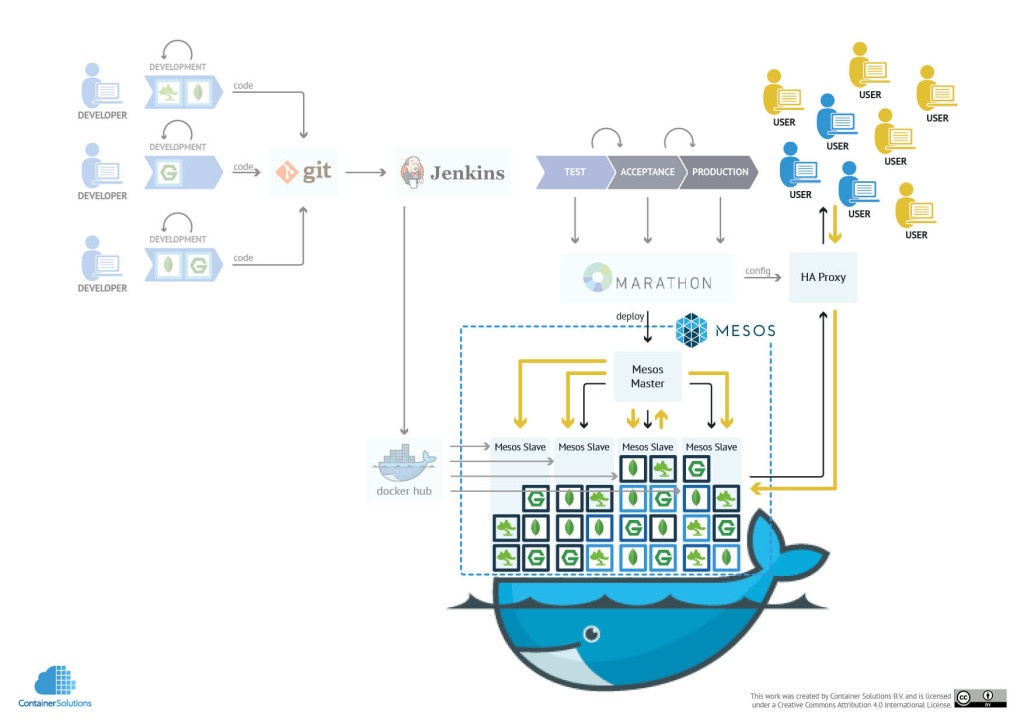 I started working on this set-up mainly to help developers and administrators to learn how to use Docker and Mesos in context of continuous delivery. Over the course of the last few months I saw that the full system is very complex and hard to explain and even harder to set-up and start playing with it.

For the same reason we asked our friend Marta Marszal who created excellent visuals to make the story much more clear.

Please feel free to suggest improvement and grow this example system to help other people to learn and experiment.

You are also free to download the diagrams as separate images, or as a PDF with a full story and re-use them any way you like (please don't forget to mention us).
CD_with_Mesos_Docker

Also all the sources can be found in GitHub: https://github.com/ContainerSolutions/cd_demo 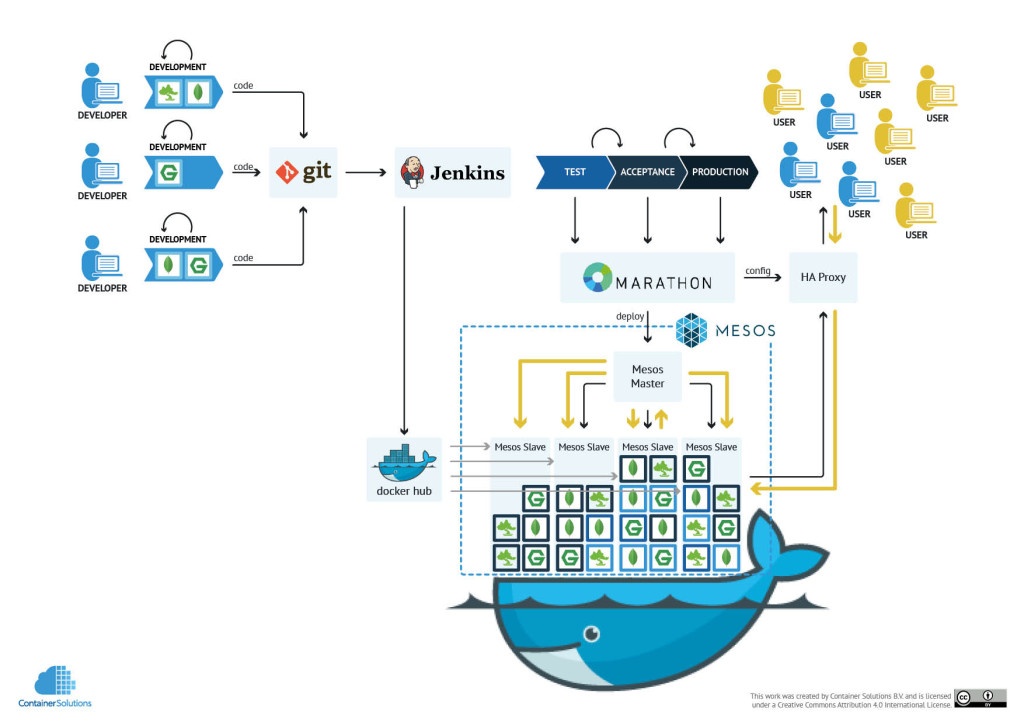 Running Docker in Jenkins (in Docker)