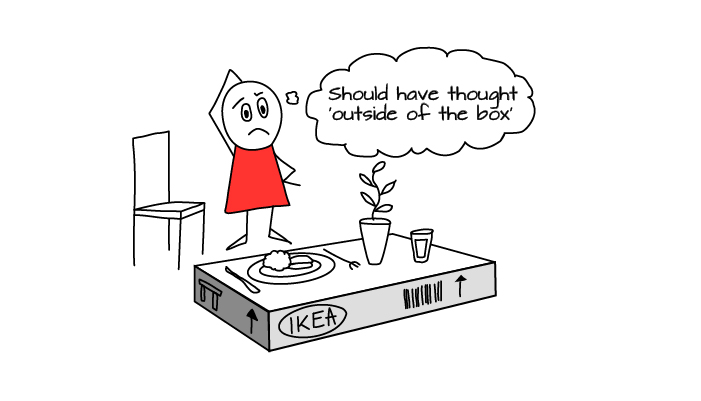 Working with financial, retail, and telecommunications over the past couple years as a consultant, I’ve seen a big emphasis on innovation, and companies pushing hard to get more innovation out.

In most of these companies there is a common pattern. The mission and vision has the single word “innovate“ in it; there are workshops every 6 months company wide, to emphasise how important innovation is, and a hackathon is organised to think of innovative new things. Then, the projects that the hackathon generated are stopped to focus on the current business, the workshops are not followed up with action, management replaces the emphasis on innovation with an emphasis to fix customer issues.

But, what if the benefit and product you provide have stayed the same over the years, and no innovation is happening at the level of the service or benefit. You’re not providing a significantly new or interesting product.

This is the innovation we’ll focus on in this article, because it’s probably the type of innovation the workshops have been about and the one mentioned in the mission.

Innovation, to be clear, is also about doing new things, rather than thinking up new ideas.

You see, most innovation happens out of necessity and technological opportunity as shown by an extensive study by Josef Taalbi titled “What drives innovation? Evidence from economic history”. 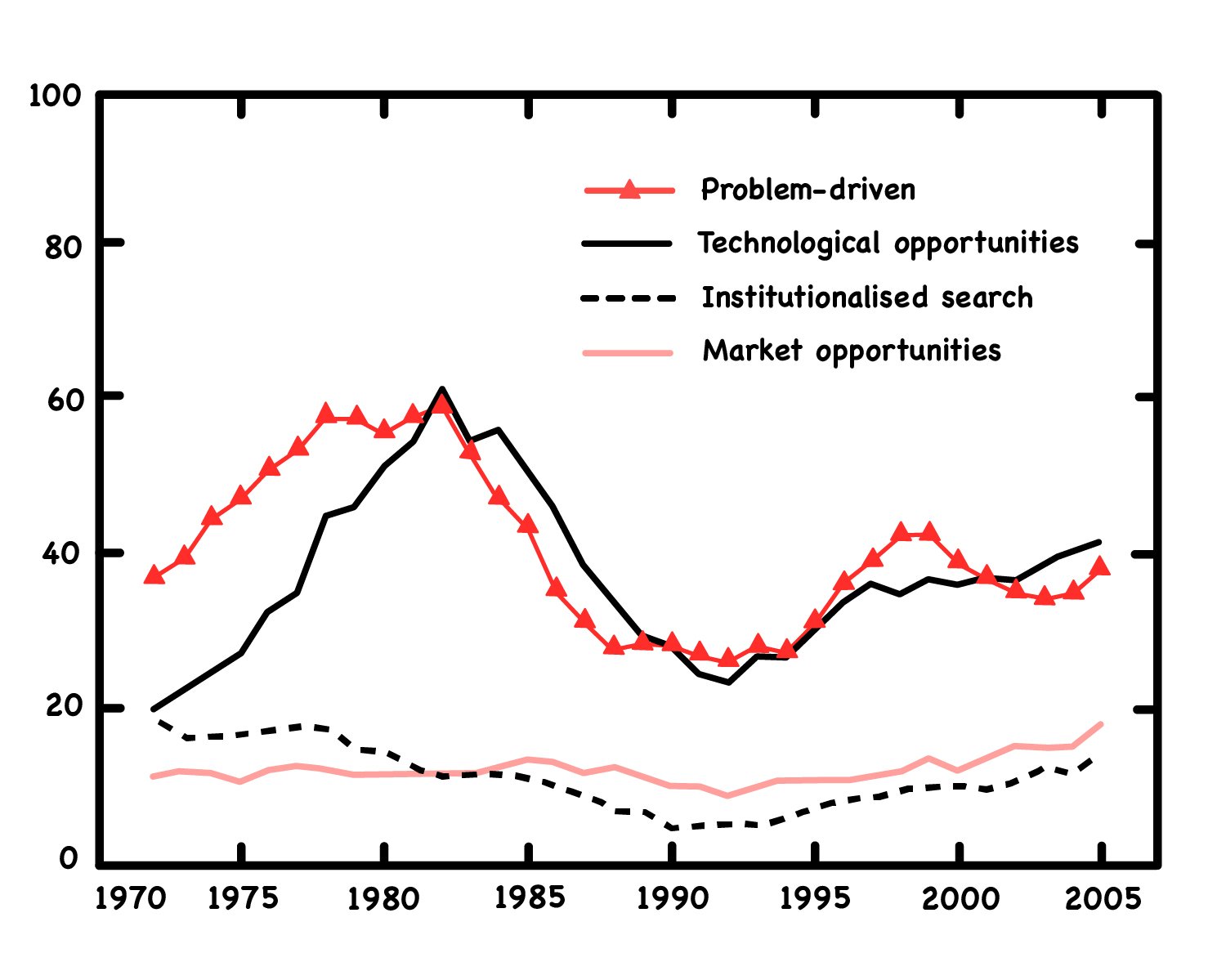 Fig. 6. Innovations by origins (5-year centred moving averages), 1970–2007. Note: Due to overlaps, the sum of opportunity, problem-driven, and institutionalised search may not add up to the total.

When new technology comes along that helps solve our problems and adoption reaches critical mass, we use that same technology and our business evolves because of it. Most businesses also react when competitors start using a new technology, and start using the same in a follower fashion.

When companies face an existential crisis, they often innovate to solve that problem in a “when we get to that bridge“ fashion.

A very small part of overall innovation happens due to active effort, but it seems this is the innovation most sought after.

So we’ll also focus on that aspect of innovation and talk about how to reliably foster it.

People are at the forefront of innovation.

As a company you want to hire people who care about the work they do, and are invested in the outcome of their efforts. This doesn’t mean hiring any person with any level of experience based solely on their love of the game, and then teaching them.

Find people who are experienced, as well as newcomers in the market who are interested in the field or industry. You want people who know the industry well, as well as people who can see beyond the blinders of past experience.

You need both new ideas and people to validate those ideas against.

A good mix of people allows businesses to have a diverse set of perspectives and ideation, which could turn into real innovative thinking.

Create an environment where people can do their best work.

Planning ahead too much might reduce agility and remove the flexibility to change course along the way. If you’ve ever heard of the marshmallow challenge, you’ll know how important iteration is, and steer clear of planning too far ahead.

Likewise, people need space to play with new ideas and explore ways to improve your business. Google famously has a 20% rule, that allows good people to work on projects which they think will benefit the business and create palpable outcomes.

Time for play needs to be specific, protected, and encouraged if you want this time to be useful by any means.

Dr Stuart Brown's book “Play: How it Shapes the Brain, Opens the Imagination and Invigorates the Soul“ and Portia Tung’s work and talks such as “How to Enable Transformational Change and Have Fun Doing It” are great places to learn more about how important play is.

This makes it really difficult for well-intentioned people to do their best work whilst simultaneously navigating policies in order to get tangible results.

Your policies need to be well thought out to prevent any serious threat to the business, whilst leaving plenty of room so people don’t need to fight bureaucracy in order to try something new.

People need space to automate the repeatable, fix the easily-breakable, and release mundanity from everyday work, so they have time and space to spend on novel work, and in this novel work, discover new paths and ideas which lead to innovative solutions.

People need to have space to think about innovation holistically.

People stuck in a specific box in an organisation, often innovate and improve that box. They automate, reshape and re-architect that box, with the same benefits pouring out of the other side.

If people had a more holistic view of the things outside of that box, they could be valuable contributors to the processes and innovations happening holistically.

This does not mean everyone gets to do everything. Roles are still important, but communication on a more holistic level allows them to think more holistically, and if not innovate, at least contribute to the ideas that could lead to holistic innovation

People need to be incentivised to innovate. They need to know that failure is acceptable and necessary, and that innovation, regardless of success, is encouraged and incentivised.

This doesn’t mean rewarding failure the same as success. That would be counterproductive and land you a bunch of half-baked solutions. But, you do want to encourage and incentivise failure to the point that people don’t fear trying something new. Make failures public and acceptable, and acknowledge the effort people make to get to failure, what the idea was, and why they tried in the first place. At Container Solutions, for example, we have a wildly popular, dedicated Slack channel “failure-announcements”, which we use to celebrate failures. This allows others in the business to feel recognised when they fail, and know that failure is acceptable when taking risks.

Alexandre Janssen in his Ted talk “Why innovation is all about people rather than bright ideas” talks about giving every person expected to innovate an I F**ked Up card.

If they fail at trying something new, they’re allowed to use this card and you, as their boss, have to take responsibility for the failure.

It gives people explicit permission to F**k Up. It’s okay to do so, and this card proves it. There is less fear of failing if failure is known to be acceptable.

Expecting and reacting to failure in the right way is paramount to a culture of innovation, even knowing that your failure might be public.

IKEA is immensely successful, but they too have failed spectacularly before, to the point where they have a IKEA museum listing some of their epic blunders.

There are also some great examples in the Failure Awards.

Getting out of “what you do”

It’s going to take a lot of courage if you are truly looking to be an innovative company.

Innovation is when businesses or people try out new things, regardless of whether they will or will not work.

IKEA creates and ships unassembled furniture. Imagine for a moment pitching the idea to your current boss if it didn’t already exist.

Many companies define themselves by what they do—We make clothing. We sell insurance. We service cars.

These are things that companies do, not the benefit they provide, and this means that processes are hard to innovate because they are well known and repeatable.

But when companies define themselves by the benefits they provide, thinking about innovation becomes simpler. This allows you to jump across lines.

IKEA, instead of creating furniture shipped in big trucks pre-assembled, realised that un-assembled furniture is more efficient to distribute, cheaper to manufacture through automation, and allows flexibility where effort is applied. They moved their efforts from manufacturing furniture, to creating great furniture “experiences”.

If IKEA were assembling furniture, adding a new design would take a lot of change to assemble that furniture, and big changes to how they manufacture. This is when the next design arrives.

Through effective manufacturing automation of flat-pack furniture, they remain agile in what they can design and build.

Walt Disney created great theme parks. But he didn’t think about what he does, he thought of the benefit it provides. He created clean, memorable experiences—all the way to creating great trash cans and famously spacing them out in an innovative way. He measured how far people would walk before dumping their trash, and used that to decide how far apart trash cans needed to be. That has nothing to do with running a theme park. It has everything to do with creating a great experience.

Innovation is not always about big-bang new ideas

There is no such thing as a new idea. It is impossible. We simply take a lot of old ideas and put them into a sort of mental kaleidoscope. We give them a turn and they make new and curious combinations. We keep on turning and making new combinations indefinitely; but they are the same old pieces of colored glass that have been in use through all the ages.”

If you innovate hard enough to start creating a new product or a new way to reach clients, know that that innovation might be inferior to what you already have.

Your current offering and product has had years of innovation and change applied to it. Your new initiative is just starting. If everything your innovation needs fails, would it still be even a little bit worthwhile? Then do it!

You also need to be open to candid feedback on things you’ve spent years building.

This is probably one of the most difficult things to do, and takes an immense amount of trust, and effort to do right. Radical Candor by Kim Scott is a great book that helps create candid feedback within your business.

The Edge of Space