The Future is Containerized

We've seen a lot of critical posts about Docker recently. I don't remember the last time a technology caused so much controversy and heated debate1. In this article I'm not going to address any specific technical issues, but try to explain why Docker -- or at least some form of containerization platform -- is here to stay.

A reasonable definition of a container is "a portable store for a single component and its dependencies". In this sense they are like VMs; both containers and VMs can be used to wrap software in an isolated and complete environment. However, it is the significant differences between VMs and containers which open up new use cases that threaten to revolutionize the IT industry. Compared to VMs, containers are: 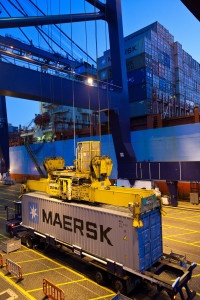 Perhaps the greatest single promise of containers is the creation of a consistent environment from development through testing and into production. At the moment, countless hours are lost chasing bugs that occur when software is moved between environments. The code works perfectly on one developer's machine, but breaks for the next developer as they have a different version of a library. By moving to a containerized workflow where the same container image is used in development, testing and production, we can significantly reduce or eliminate the overheads and pain caused when moving code between environments.

There are other significant advantages and use cases opened up by containers. It becomes much easier to move between cloud vendors such as Google Compute and AWS -- if your code is in a container, it should run the same everywhere. Configuration worries can be vastly reduced by shipping applications in containers; there's no need to worry about the end user's OS if you ship the OS with the software. Microservice architectures find a natural home with Docker, where each service can be given its own container without worrying about overhead.

All of these advantages come directly from the speed and portability that containers have over VMs.

I also believe that Docker will be the main container platform for years to come. The reason is they have built the Docker Hub, a public repository holding container images for programming languages, databases, enterprise software and practically everything else that it makes sense to put in a container. At the time of writing there are around 45,324 images available. Any newcomer to the container space will have an uphill struggle to build another community resource of this scale.3

None of the criticism I've seen has come remotely close to convincing me that the advantages of containers aren't real and achievable. Docker does have its problems -- I've even talked about a few of them. But they can be fixed. The truth is, the advantages containers can provide are so compelling that they are here to stay.

The future is containerized.

1. Actually, having thought about it, I do remember the last time a technology was this controversial -- Linux in its early days, back when the ever-eloquent Steve Ballmer was comparing the OS to communism.

2. Of course, VMs can do things containers can't -- most notably, no virtualisation occurs in a container, so it isn't possible to run Linux containers on a Windows machine (without putting a VM in the middle) for example. Also, VMs offer a much stronger security guarantees, which is particularly important in multi-tenant platforms. For these reasons, expect to see VMs and containers commonly used together, at least in the short to medium term.

3. Having written this, I then found out that Rocket now supports Docker images. This is an important step as it allows users to try out Rocket without the pain of redeveloping all their images. It does however strengthen the dominance of the Docker image specification, which is still a strong advantage for Docker.