The Docker community held their second Global Hack Day on October 30th with activities in no less than 30 cities around the world. The goal was to gather the members of the community to brainstorm on new ideas for the Docker project. 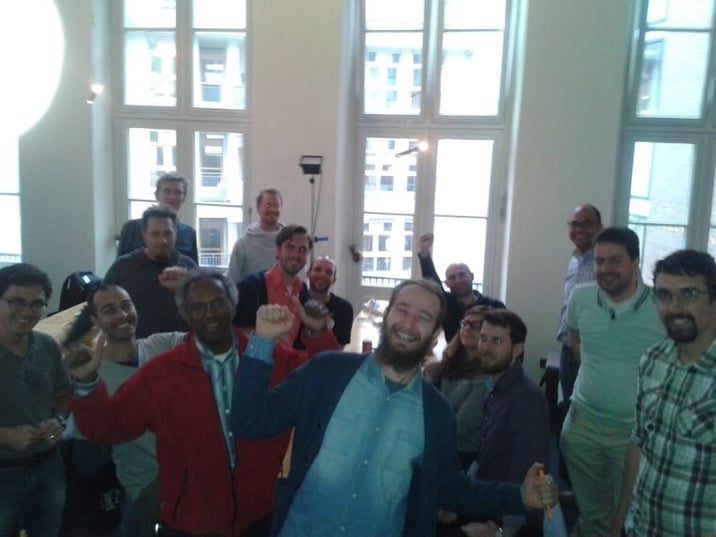 In Amsterdam the Meetup took place at the info.nl offices. 20 participants hacked using Docker and they were divided into 5 teams, each team hacking on a specific project.

Of the 5 teams that started, only those that were able to get a demo working within the evening presented their hack to the Docker team and community via a pre-recorded video. They now have a chance to win the global competition, the prize being free ticket to DockerCon Europe, but only if they can get enough votes on the voting page: https://docker.com/community/globalhackday

Each city that hosted a Docker HackDay event also had the opportunity to choose a team for the ‘local winner’ prize. Local winners get higher visibility on the global voting page, giving that team a much higher chance of winning the global prize.

Amsterdam’s winning project was unblocker created by Remmelt Pit, Bas Tichelaar and Simon van der Veldt: “The idea is that if you push a new image to a Docker registry, all the running containers with an old version of that image are automatically replaced by the new version.”

“Had a wonderful and inspiring Docker hack day. We created unblocker.py, a script that automatically upgrades Docker images on a server. It was great to be able to host the hack day.”

Find links to more information about unblocker, and runner up team, binocular, at the end.

The event was a great success, the community members enjoyed a great moment hacking together as evidenced the group pictures posted by Mark Coleman - organizer of the Amsterdam Hack Day - on his Twitter account https://twitter.com/mrmrcoleman along with the numerous ‘favorites’ and ‘retweets’!

A Tour of Docker at NL Unix User Group