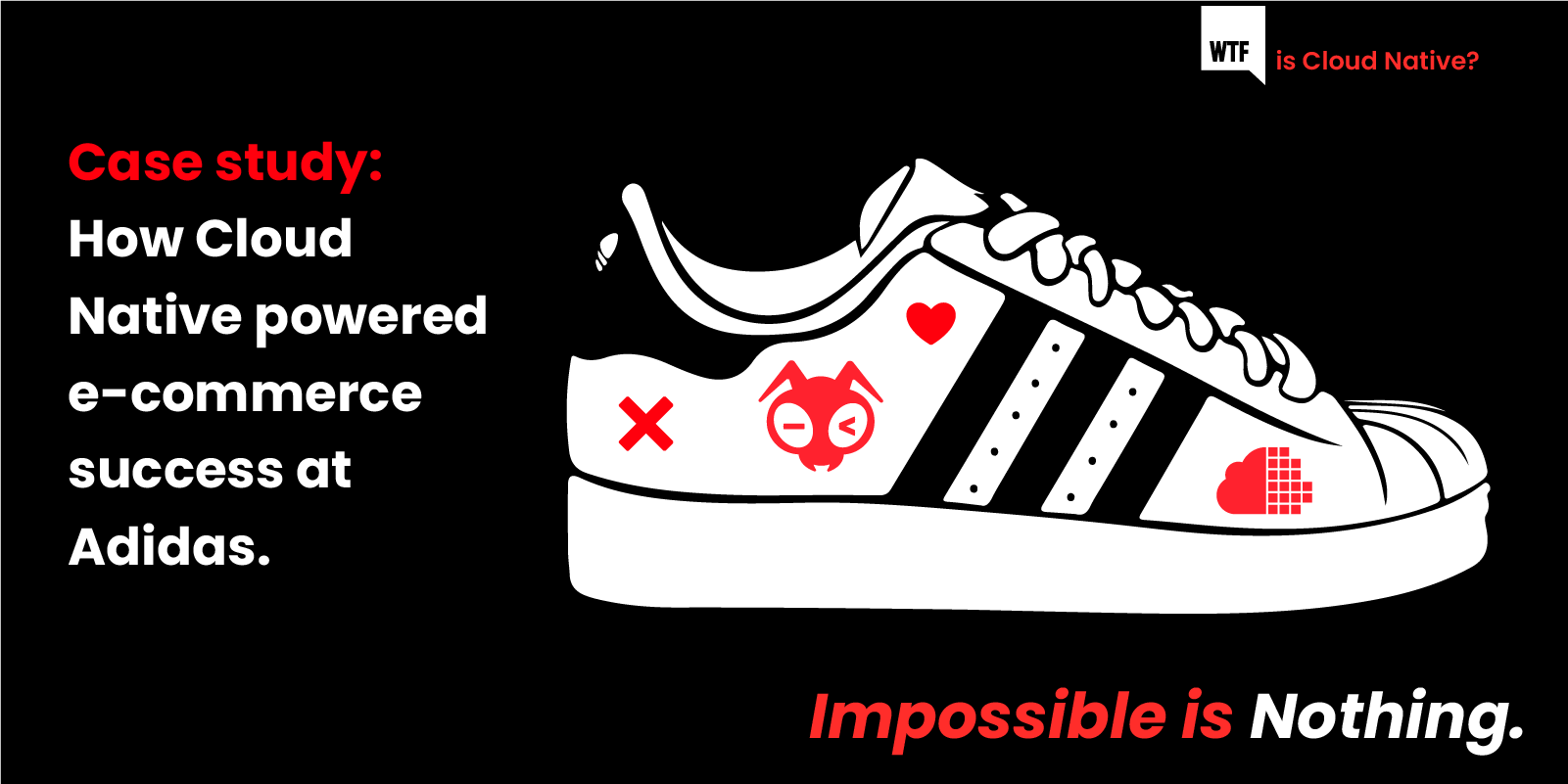 E-commerce moves fast, but perhaps never more so than in the world of sneakers and sportswear. Sneakerheads crave the latest designs and colorways; the staid functionality of gymwear has long ago given way to the kaleidoscopic trends of streetwear.

Adidas, the more than 70-year-old German sportswear company, has remained a giant in its industry in part because its leaders know that securing the status quo is never enough. As it began looking ahead nearly a decade ago, Adidas’s vision of the future included new revenue streams and advanced go-to-market strategies, like impromptu hype sales.

In the space of a few short years, Adidas achieved 100x growth in its e-commerce revenue, going from €40 million in 2012 to a projected €4 billion in 2020, revolutionising its e-commerce platform to drive that growth, and scale to meet it. The company benefited from collaboration with two partners: Container Solutions, and Giant Swarm, which accelerates companies’ Cloud Native journey by providing and operating a highly secure, reliable, and performant platform based on Kubernetes.

Navigating the 'IT Jungle'

With the power to drive high rates of innovation and scalability, the Cloud Native approach has been embraced by pioneering companies around the world. However, these very same benefits that attract companies are also very difficult to manage if not accompanied by the constant evolution of people, tech, and processes.

Daniel Eichten, vice president for enterprise architecture at Adidas, described the often-treacherous journey to the cloud as a trip through the ‘IT jungle’.

‘This is truly the most important lesson of all, the number one thing to know about succeeding with Cloud Native: If you don’t have all three of these things evolving together, your tech, your processes, and your people, well… I don't want to say your transformation is headed for certain failure, but you will have to hit some hard boundaries and some hard rocks before you really can get through’, he said.

In 2012, the company’s e-commerce revenue totaled less than €40 million. However, it was clear that e-commerce, and the ability to meet customers’ demands, was going to be decisive for retailers like Adidas in the future. The companies that got it right would see continued success; those that didn’t would lose customers and fall behind.

The challenge that the Adidas team faced was that they needed to build a Cloud Native platform that was reliable, fast, scalable, and efficient. The company’s biggest retail door — the e-commerce store, needed to foster rapid innovation cycles, and provide users with a robust and enjoyable experience.

In order to make a significant difference to the business, bold steps were required. As Daniel said, ‘Only with great risk do you get great rewards— and more project funding, right?’

Daniel’s team decided that the solution to its challenges had certain requirements:

Kubernetes, the open-source container orchestrator, held the key to a microservices platform that ticked the boxes. But, Daniel says, ‘In Kubernetes, we found something that made impossible things possible but easy things rather complicated.

‘Knowing there were a lot of unknowns, we understood this wasn’t something we could run on our own. We needed a guide’.

Well-versed with navigating the impossible—its longtime slogan, after all, is the can-do tagline ‘Impossible is nothing’—the Adidas team was prepared by 2016 to forge ahead. But the team members understood that it would not be enough to simply buy a product — they needed operations, consulting, and real support.

It began by enlisting Giant Swarm. ‘They were the only company willing to not just give us the product but take the operations, give us consulting, and do that in all of the environments we needed to cover. No one else was, at least in 2016, really willing to go that far. All the other companies were trying to sell their products, but they did not have the guide service we needed’.

Next, Adidas brought in Container Solutions. While Giant Swarm worked with Adidas on building its new system, we began training the sportswear company’s engineers in industry best practices, and advising on processes and technology choices based on their ability to integrate and scale.

On the Adidas project, ‘Giant Swarm is fully responsible for the platform itself, but we help to make proper use of it’, said Michael Müller, Container Solutions’s chief customer officer, with training, governance advice, and fostering company-wide adoption.

Helping Adidas evaluate its technology options has been one way Container Solutions adds value. ‘In any organisation, when you’re talking about technology, you have to think two steps ahead to make a sustainable choice’, says Brendan Kamp, a lead Cloud Native consultant at Container Solutions who has worked on the project. ‘My team helped prioritize the steps and informed the decisions made, while the engineering team focused on rapid execution’.

The process is collaborative, he adds: ‘We work very closely with the platform engineering team’. For example, the Container Solutions engineers automate processes for the Platform Team, Brendan says, and offer advice on Cloud Native community standards that apply to situations the team is facing.

As its new Cloud Native platform began running, Adidas was ready to take the next step: put an application into live production. ‘It had to be something meaningful’, Daniel said. ‘No one is giving us applause or any great feedback or additional money for further projects if we play it safe now’.

The team decided to begin with something vital, but small scale: it migrated its Finland e-commerce platform into production. ‘When we did the first small test we started easy, like opening a faucet very slowly,’ Daniel recalled. ‘We opened the valves a little bit and everything was working like a charm, and the website was fast and responding great’.

But as the tests progressed, an incident flared up. A mistake in how a test was being run, rather than the Kubernetes cluster itself, proved to be at fault. ‘When you pick a new tool set, you can’t expect to immediately be the master of it,’ said Daniel. ‘And you have to be open-minded to working differently than you did before’.

The company has since moved from one Kubernetes cluster and a single e-commerce application to five global locations; each has monitoring and observability tools and Continuous Integration/Continuous Delivery (CI/CD) pipelines.

Container Solutions coaches teams on principles and practices, to help keep inefficiencies to a minimum. We help Adidas automate many routine tasks, and equip the sportswear retailer with hands-on training that enriches the developer experience.

We work hand-in-hand with Giant Swarm’s holistic support model, identifying immediate next steps while also keeping an eye on the big picture — including how technology choices made today will affect future options for the company, its business strategy, and IT teams.

Container Solutions and Giant Swarm work together to guarantee velocity and agility. While we specialise in Cloud Native transformation, strategy, and engineering, and Giant Swarm operates the Cloud Native stack end-to-end, Adidas is empowered to focus on what matters most: innovative shopping experiences for customers that drives revenue growth. As Brendan put it, ‘Adidas’s business isn’t running Kubernetes clusters. Its business is selling clothing’.

With the help of Container Solutions and Giant Swarm, Adidas was ready to handle the enormous changes that rocked the retail world in 2020. The sportswear giant met the exploding need for fast, responsive online shopping, enjoying greater e-commerce success than in 2019. Since adopting a Cloud Native approach, Adidas has achieved:

And this is just the beginning, Daniel Eichten said. ‘This is not simply a new technology that you get installed and then it’s done… It simply doesn’t work that way; there’s no “set it and forget it”. All these things have to be in place and working in tandem. The processes have to go hand in hand with the technology, and both must go hand in hand with the culture: from the top down, the management style and the organisation itself has to change’.

Heather Clancy and Michelle Gienow contributed to this article. A more detailed account of Adidas’s story is available in the book Cloud Native Transformation: Practical Patterns for Innovation (O’Reilly Media, 2020). You can download it for free here.

Are We Heading for Peak Cloud Native? It’s All a Matter of T...

Upskilling a Team: an Engineers' Roundtable