Programming Languages for Microservices (and Containers) 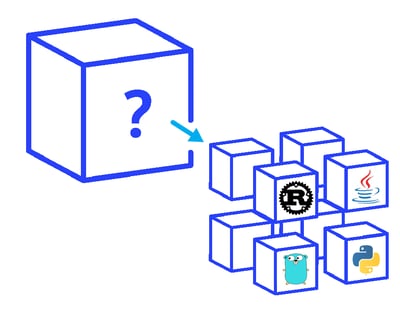 But some languages are more effective in certain contexts. Using a more appropriate language won't fix a bad business plan, but it will give you and your team an edge. In recent years I've been working with containers and microservices, and I'd like to share my thoughts on what makes a more effective language in this context.

Speaking the Language of Microservices

First, what do I mean by microservices? I'm talking about an architectural style where a system is composed of multiple fine-grained distributed co-operating components (for a better definition take a look at Martin Fowler and James Lewis' article). Less accurately, but probably more usefully, I'm talking about containers (typically Docker) running in a cluster (typically orchestrated by Kubernetes).

In practice, the most important characteristics of a running microservice architecture are ephemerality and scalability. By ephemerality, I mean that individual instances of microservices (containers) will come and go over time. This can be for various reasons (scaling, updates, node failure etc), but the end effect is the same — your containers will die. Scalability (more accurately horizontal scalability) means that if you need to service more traffic, your microservice can easily be scaled up simply by adding more instances.

In order to make the most of these characteristics, microservices should:

Most of these do not come for free; whatever programming language you use, it will take some thought and design to achieve them in practice. That being said, I have found that some languages work better than others. My advice:

Also, a little more controversially (or at least more dependent on context):

From this, you can probably see why a lot of people use Go for microservices. It's reasonably fast, can produce small, static binaries and is garbage collected. But I'd also like to suggest an alternative that has been gaining a lot of traction recently: Rust.

Rust beats Go for speed (hands down, Go isn't really that fast), can make static binaries easily and has generics (forgive me, I couldn't resist that one). The biggest difference with Rust is how it manages memory. It's not garbage collected, instead it has an "ownership" model that ensures all memory is accounted for and prevents various memory faults (full details can be found in the Rust documentation). This makes for a different programming style when using Rust, but one that emphasises safety and immutability. Which naturally pushes programmers towards creating stateless and reliable code that naturally works well in a microservice architecture.

Having said this, I want to reiterate my opening point about language choice. I'm not saying you're doing it wrong by writing microservices in Java or Ruby. If you have a team of Java programmers that have never touched Rust, please don't retrain them all and start a big rewrite tomorrow. What I am saying is that it is worth considering using other languages where appropriate. This can be done in a piecemeal fashion when using a microservice architecture, a technique highlighted in the Deliveroo blog Moving from Ruby to Rust.

Disagree? Got a better suggestion for a microservices programming language? Let us know!

Structure is Not Enough; Or, Why People Matter

A Monolith Is a Burning Platform