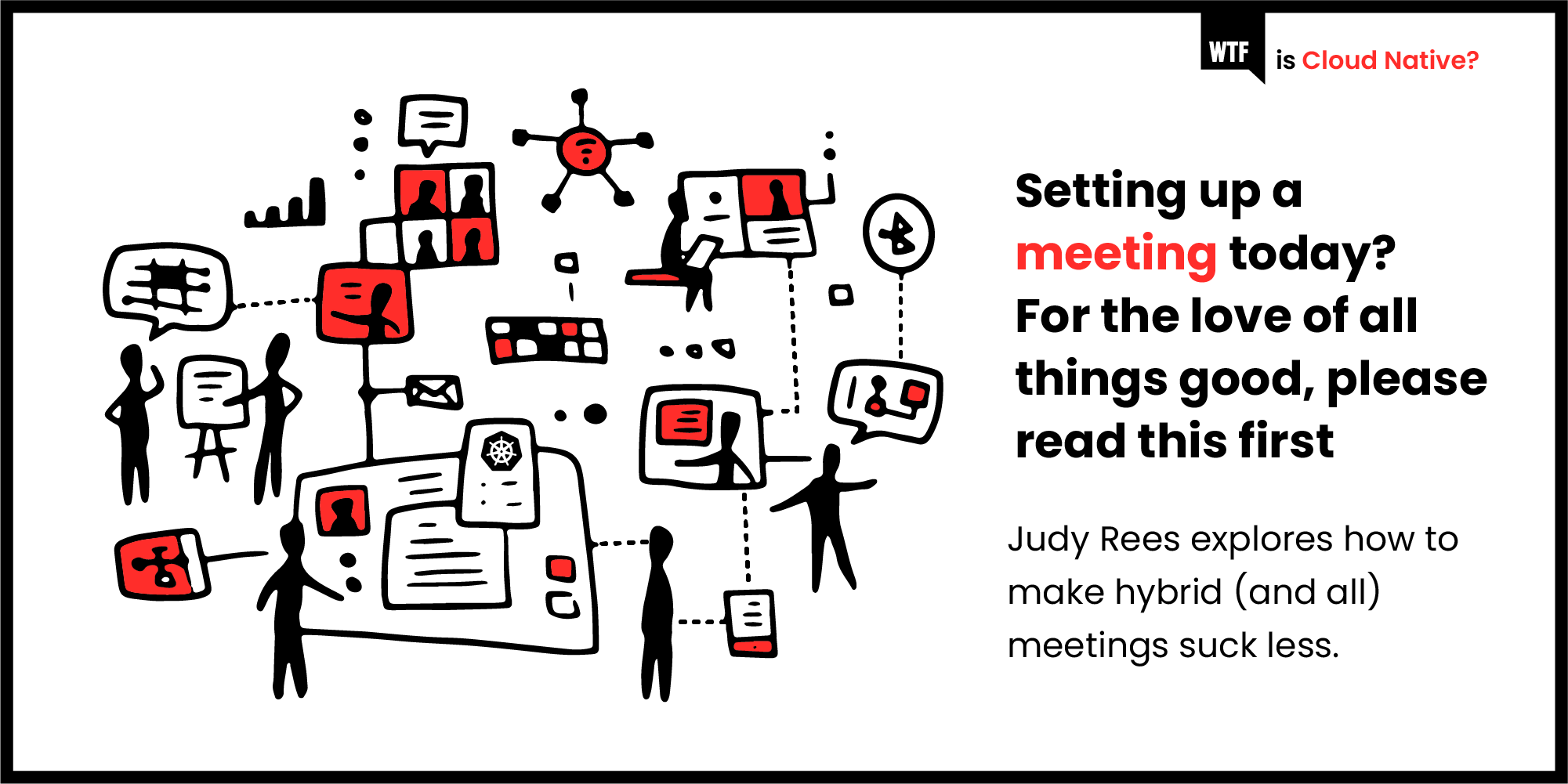 How to Make Hybrid Meetings Not Suck 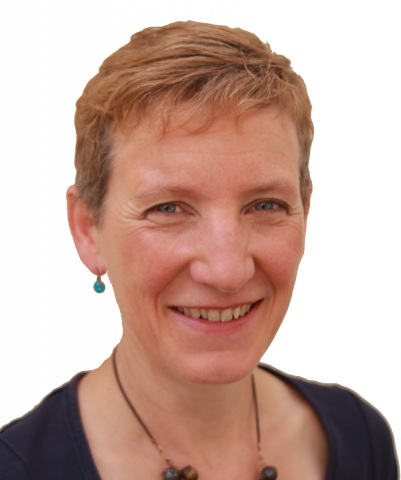 Hybrid meetings are back - and people are enjoying them and finding them useful. That’s the shock finding of new research by Dr Joseph Allen, meeting scientist at the University of Utah.

Like most experts on remote teamwork, I’ve long advised the “one remote, all remote” rule: if anyone who’s needed for a meeting can’t attend in person, everyone should join a video call from their own device, in a quiet space. That’s the best way to put everyone on a level playing field for participation.

Post-Covid, am I suddenly wrong? Not really, it turns out. But Dr Allen’s research does hint at hope for the hybrid meeting.

Let’s all agree that life would be so much easier if hybrid meetings - that’s meetings where some participants are in a room together and some are connecting via phone or video - combined the best of both remote and in-the-room meetings. Whoever was in the office could gather in a meeting room. Whoever was somewhere else could dial in to a video call. The magic of technology would bring the whole thing together. Job done.

But as you probably know, that’s not actually how it works. The truth is that many hybrid meetings usually bring out the worst of both formats. A hybrid meeting tends to be a “FishChicken Fudge”: neither fish nor fowl. And often distinctly foul!

In far too many offices, the typical hybrid set-up involves only one laptop, perched at the end of the roomies’ table, with its screen showing the video feeds of those remote participants who have their cameras turned on. The laptop webcam shows a “bowling alley view” of the roomies to the Zoomies, and its microphone and speakers provide the only in-the-room audio facilities. That never works. The remote participants can’t hear or see what is going on, they can’t get a word in, and it ends up being horrible - and exhausting - for them.

It’s not hard to find examples of other tech nightmares in hybrid meetings. For example, in a recent online discussion, software delivery coach Chris Pitts listed remote participants' cameras actively disabled; poor network infrastructure leading to lag, dropouts and echo; poor choice of collaboration software. “I keep coming back to the technology and infrastructure being a huge factor in how successful it will be,” he said.

Lisette Sutherland, author of the bestseller Work Together Anywhere, is an expert in remote meeting technology. She told WTF,

Infrastructure is where people really go wrong: just creating presence and participation for the remote participants. How do we hear and see each other? How do we contribute to the conversation through whiteboards or whatever?

But in all honesty, it doesn't take anything super fancy to create presence and participation. Just making it so communication is crystal clear, without being complicated to set up and use.

Conversely, adaptations made for hybrid meetings can also be helpful even in a non-hybrid context. WTF’s editor-in-chief Charles Humble told me, “At one company I worked at we used shared Google Docs rather than an overhead projector for the executive team meetings when we had on-line participants, and found that even the in-room participants preferred it. For many people, me included, it is much easier to read documents on my own laptop than a projected image, and it also meant we could use shared note taking and other forms of collaboration. We ultimately adopted this as a best practice even for our fully in-person meetings.”

This stuff is fixable. It requires time, energy and some money, but it’s not beyond the ability of most organisations to ensure that all participants in a hybrid meeting can be heard and seen clearly throughout the meeting (even when someone shares a screen), and all have access to the collaboration software.

It requires attention both to the technology in the meeting room, and the technology being used by the Zoomies. It requires attention to bandwidth, microphones, webcams, lighting and background distractions. Some people may still need to be persuaded that turning on their camera is worthwhile. But ensuring everyone can be heard and seen, and can access the collaboration tools, is the minimum standard: the price of admission to effective hybrid meetings.

When you fix the technical infrastructure, you’ll fix some of the issues with horrible hybrid meetings. But you won’t fix all of them, because fixing the hybrid meeting isn’t just a technical challenge. It’s also - perhaps primarily - about people and how they interact.

Comparing data about meetings from October 2019, May 2020 and June 2021, Dr Allen’s team found that face-to-face meetings were rated as most satisfying and effective, with fully virtual meetings not far behind. The shock was that hybrid meetings were rated quite similarly to these two modes. (Teleconferences were rated the worst, by a long way. “In the tank,” said Dr Allen.)

So, what was going on? First, people in these early-adopter post-Covid hybrid meetings were working hard to get the meeting basics right: having a clear purpose, an agenda, starting and ending on time, and only inviting the right people. Secondly, and perhaps more importantly, the leaders of these meetings were working hard to make sure everybody actively participated.

“If someone said, ‘I personally actively participated in the meeting,’ that was a stronger predictor of satisfaction and effectiveness than anything else we collected,” Dr Allen said.

Ensuring active participation from everyone in a hybrid meeting presents a complex challenge. Karin Reed, co-author of Suddenly Virtual, is working with Dr Allen on a new book, Suddenly Hybrid: Managing the Modern Meeting. She told WTF,

We are going from a single-network way of communicating to a multi-network way of communicating... When you have people who are joining from one conference room, three people there, another conference room, three people there, and then five people joining from their individual webcams, you have multiple networks with multiple modalities. And that makes it much more complex.

In that complex context, the big challenge is to be inclusive, to give space to everyone’s voices when there are disparities just by virtue of how people are attending the meeting. Roomies and Zoomies are having two different kinds of experiences. Like people from two different cultures, they share a common evolutionary history, but their different environments put pressure on them to behave in subtly different ways.

All humans have evolved to have a proximity bias: they have a preference for people (and things) that are physically close, and pay them more attention than those that are far away. So it’s not surprising that the people in the room tend to (often unconsciously) exclude or forget about the remote attendees - or that Zoomies get distracted by their cats or kids.

Similarly, everyone has an in-group bias: they tend to favour people who seem to be like themselves. Roomies, therefore, tend to prefer other roomies - while the Zoomies may form their own counter-clique.

The two groups have different cultural practices, often driven by access to resources. For example, remote attendees typically use the typed meeting chat system, while those in the room rarely do so. Roomies can use their body language to indicate that they want to speak, those online will often use the “hand raise” feature in the video platform.

For the people gathered in one place, these three elements are deeply - perhaps inextricably - linked. For an important discussion, we get together for a whole day (or even more), gathering over pastries, coffee, lunch, and dinner. Eating and drinking together builds trust, small-group conversations happen, confidences are shared, and the more we open up to each other the more trust develops. We form a strongly-connected in-group.

For remote-meeting participants, it’s not like that. Our continuous time online together is less than a day, both to avoid Zoom fatigue and to allow space to deal with the realities of working from home. The timebox is clearly defined. Each of us organises our own food and drink.

Want to quickly sour the atmosphere in a hybrid meeting? Provide tasty-looking refreshments for the in-the-room participants in full view of the remote attendees!

But as Dr Allen’s research shows, overcoming all this asymmetry isn’t impossible. He said,

If you have an inclusive environment, if you have that psychologically safe environment, and everyone feels as though they can participate, and they do, you're going to have really good hybrid meetings.

But that's the key challenge. It's harder, because as a meeting leader, and as an attendee, you have to pay attention to the people in the room and on the screen, and not lose anybody. It is harder, but it's doable.

Mohammed Ali of The Innovation facilitates the creation of environments that enable anti-racism, inclusion and belonging. He told WTF, “When we have been running hybrid workshops it's worked well, as everyone has taken some responsibility for inclusiveness. We have check in points to ensure everyone is being heard - it's been really awesome.” And his experience isn’t unique.

Douglas Ferguson, author (with his team at Voltage Control) of an excellent Hybrid Work Guide recommends focusing on the people involved, and on building connections between them. Connected people will find ways to stay connected, even building their own backups when the best-laid tech plans fail.

It comes back to this: don’t forget first principles. If, when we come together, we're saying that we care deeply about everyone participating, and everyone collaborating, then anything we try is going to be well received. We're going to get feedback on how we might tweak it, and everyone will support everyone.

We might still make mistakes, but attendees are going to understand, so long as we've created a space of psychological safety, where everyone understands that we're in this together at a time of experimentation.

Taking all of this on board, I’d still advise you to avoid organising hybrid meetings if you possibly can. It’s much, much easier to make an all-remote meeting successful than to test yourself against the complexity of a hybrid. So make all-remote, not hybrid, your default.

And of course, think carefully about whether you really need a meeting (yet)? Could this be an email? A Slack thread? A video message open for comments? As Darren Murph of GitLab points out, “Asynchronous, or async for short, is a superpower for remote teams.” Some of the most valuable meetings emerge from asynchronous discussion of a topic, and shifting into a real-time meeting once the key issues have been identified.

Once you know your meeting will be hybrid, make time to plan it effectively. Start with the basics, which apply to any meeting:

To take your meeting to the next level, create a collaborative environment where everyone actively participates. Dr Allen says: “The challenge with hybrid is that it's a much more complex communication environment. That's a tall order for any meeting leader, which is why we really emphasise the need for this to be a collaborative approach. You can't just pile it on the person who organised the meeting, you have to share that responsibility. If you're remote, you have to be willing to step up and say, ‘Hey, wait, what about me?’.”

If you want to read more on this topic I recommend Mark Kilby’s article for WTF.