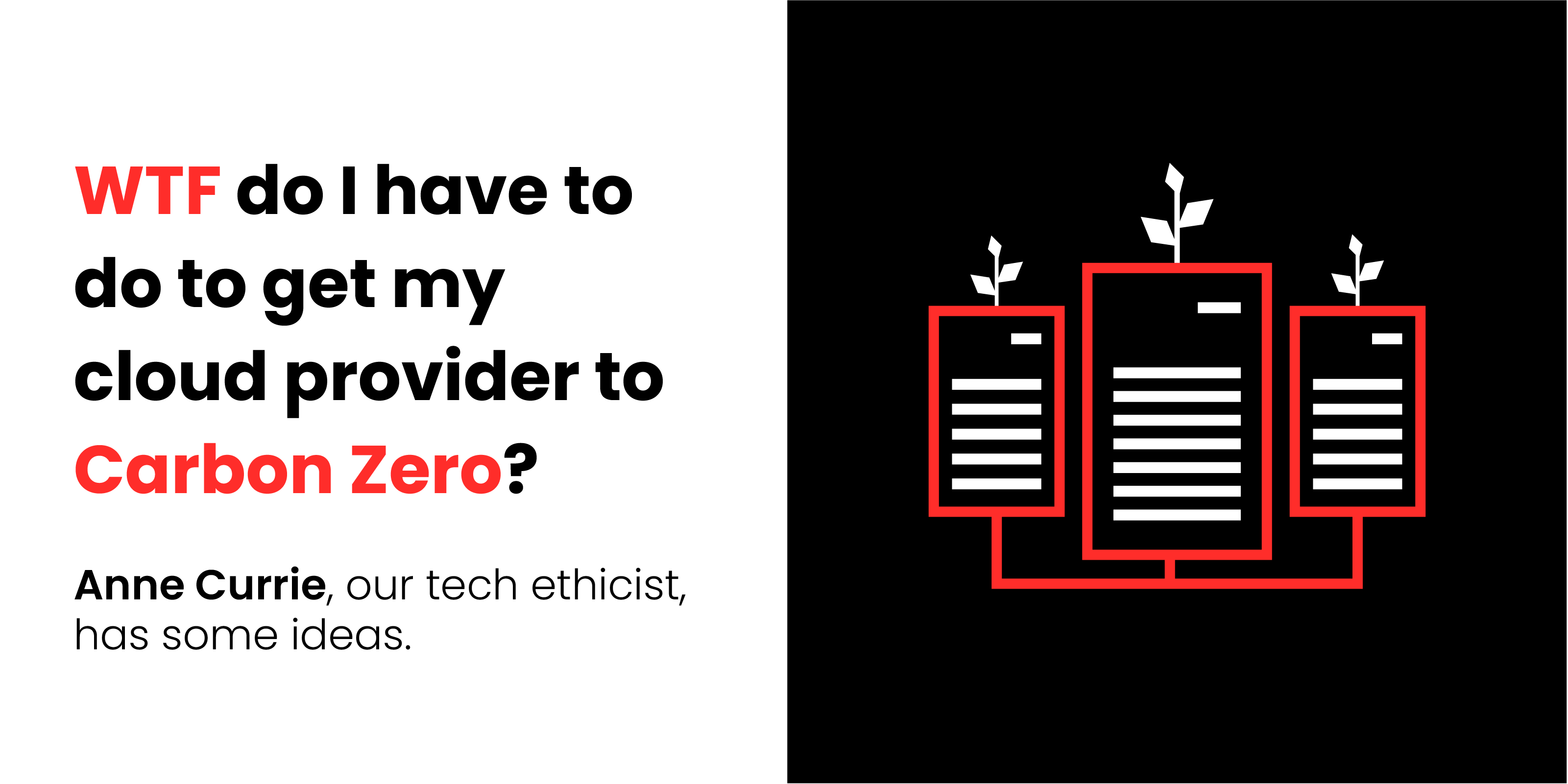 Cloud Native, Going Green, and the Power of Civil Resistance

What’s the best way to change the world? Two researchers published a book in 2011 on the history of conflict that took up that very question. Their book Why Civil Resistance Works pointed out a surprising truth. If you want to change stuff, non-violent means are a lot more effective than violent ones.

The moral is, if you want to see a change happen, you need to make it incredibly easy for people to join in.

And this has everything to do with managing your Cloud hosting provider.

Let’s step back for a moment. Why do people move to the Cloud?

There are many reasons businesses choose to host via a Cloud provider. A big one is risk management. The major public Cloud providers—AWS, Azure, and Google—are excellent at handling infrastructure risks like security, scalability, resilience, efficiency, and legal compliance. They are really, really good at that stuff. Let’s face it, much better than us. It’s what they do. It’s all they do.

By outsourcing those operational risks to them, in the vast majority of cases, you’re lowering them. That’s fortunate because with a Cloud provider you’re usually locked in: their risk is your risk.

The Risk Posed by Legacy Infrastructure

This September, BP published its 2020 Energy Outlook. In it, one of the key questions the report  suggested businesses ask themselves was:

‘What if policymakers ignore the problem [of climate change] for a few more years, then panic and try to do a couple of decades’ worth of decarbonization in a few months?’

The point BP was making: if you’re a large business with a great deal of legacy infrastructure that relies on the oil, gas, or coal industries directly or indirectly, this could be a very major problem for you.

Think it could never happen? That knee-jerk, draconian laws would never be passed to address the evidence of a catastrophic problem? One that could potentially have been predicted and tackled earlier, with less drastic economic consequences?

I suggest you take a look at the U.S. and U.K. responses to COVID-19. We learned that lesson. Eventually, governments will be forced to act on the climate too. The fact they haven’t done so yet suggests they’ll move suddenly and aggressively when they do.

How might we get overwhelmed? To paraphrase Ernest Hemingway: Gradually, then suddenly.

But I Don’t Have an Oil Pipeline

Are Your Data Centres Oil, Gas, or Coal-Powered?

The answer to that question is: it depends.

As we discussed recently with Forbes, it depends on where they’re located and how the electricity grid there is powered. It depends who’s running them and whether they have secured their own renewable power sources. It depends whether they are orchestrated cleverly enough to take advantage of a sunny day or a windy one.

None of these things happen by accident. Fundamentally, it all depends on whether the Cloud provider operating that data centre has managed their risks.

In 2018 (and updated in 2020) Paul Johnston and I published a whitepaper on the current state of sustainable cloud hosting. We concluded there is considerable difference between the positions of the cloud providers.

Google (GCP) has been Carbon Neutral since 2007 using offsets via credits and by being the largest non-governmental purchaser of renewable power in the world. It aims to be Carbon Zero (put no new CO2 into the atmosphere) by 2030.

Amazon also aims to be Carbon Zero for AWS by 2030. However, it is not yet Carbon Neutral. Although AWS is (through buying credits) in four sustainable regions, that is only a fraction of its global capacity.

If I had to assess the risk on the goal, and it’s a really, really tough one, of being Carbon Zero by 2030, I’d be reasonably confident Google and Microsoft can make it. They have both been making steady, clear progress on it for over a decade. AWS, however, started moving only very recently, are not upfront about their detailed milestones or progress, and appear to be roughly a decade behind their competitors. They are at higher risk.

How Can You Manage This Risk?

How do you manage anything? Keep the pressure on and track progress against milestones.

Getting to Carbon Zero for your own server infrastructure will be hard. Like any operational risk, the safest thing to do is outsource it to a Cloud provider. But for this one it’s not delegate and forget.

If you want to be safe (and green), host on GCP or Azure. They seem to have this in hand.

For AWS, things are not so straightforward. You’re going to need to do some work. If you want your business to be Carbon Neutral today, you will need to host in AWS’s Ireland or Frankfurt regions in Europe, in the U.S. West (Oregon) region, or in Canada. Beyond that (and even if you host in one of these four) you need to keep the pressure up on AWS to meet its Carbon Zero goals. The good news is, Amazon is customer-driven. If you demand it, you’ll get it.

In 2019, a group of European climate-minded technologists wanted to send an open petition to AWS asking it to be clearer about its climate policies. It was perfectly civil. The things it asked for were a minor step on from AWS’s existing public commitments. The group were well connected and competent. What could possibly go wrong?

Not a single major AWS customer would agree to be the first signatory. Why did it fail? The barrier to entry was too high.

No one wanted to apparently criticise AWS publicly and making a public statement about anything is risky for a business. It takes loads of sign off. Just like holding a placard and chaining yourself to the railings outside Amazon HQ, the barrier to entry was too high.

Does that mean there’s nothing we can do? No. We can take the less intimidating route.

The least scary actions here are the ones most likely to be effective:

The point is not to make a personal sacrifice, but to get something done. These actions will make it easier for you and other companies to raise this issue with your providers, and through force of numbers, drive them to take it seriously and deliver.

BP is right. Eventually, governments will move and the law will force change. Don’t be one of the businesses destroyed by that. Act now to reduce the risk for you and your planet, and quietly tell your provider you care. 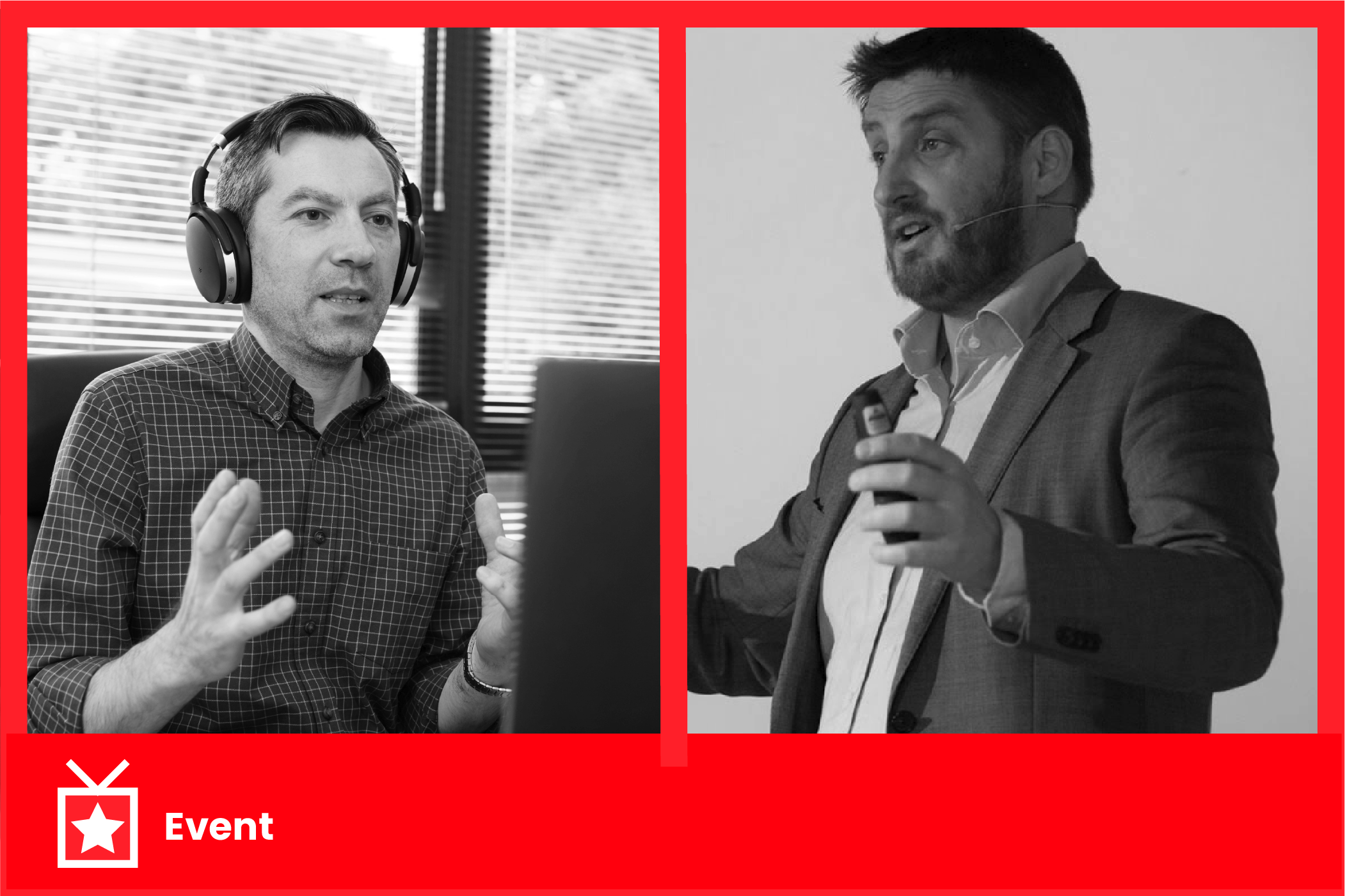 WTF Is WTF Is Cloud Native?